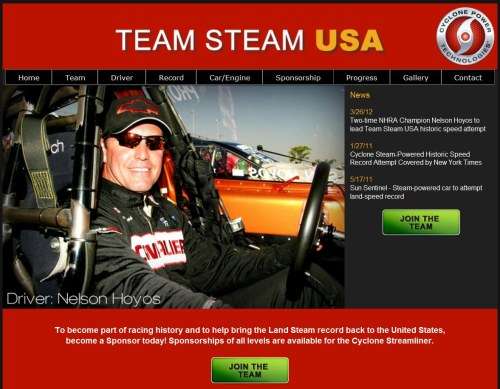 Nelson Hoyos will serve as Director of Development for Cyclone Power Technologies (OTCQB: CYPW) LSR car and performance division, known as TeamSteamUSA, as well as oversee its management, marketing and sponsorship activities.

Frankly, this reporter has been wondering when the LSR run would actually take place. I covered the LSR when it first came out. Read: Cyclone-Williams' presents steam-powered LSR racer at American Veterans' Benefit as well as Cyclone-Williams Steam-Powered Speedster nearing completion.

First it was scheduled for Bonneville for August, 2011, then business needs like customer contracts came into play, and the run had to be delayed. As a business-oriented guy, I fully understood, but then there was news of using the NASA landing runway for development, and possibly a run there. Then the news went blank.

According to the latest news release, though, Cyclone's alliance with Hoyos is a major development for the company. Not only does he bring the knowledge, experience and proven track record to build a winning LSR team, but also strong and established contacts with renowned technology firms which can help advance the performance of the Cyclone Engines.

Moreover, Hoyos' leadership in building Cyclone's new Bonneville-compliant LSR chassis and body, and his hands-on participation in engine and drivetrain integration, are expected to provide Cyclone with the extra manpower needed to pursue this project without detracting from the Company's focus on customer contracts, including Raytheon, the U.S. Army and Phoenix Power.

For the record, Nelson Hoyos is a two-time NHRA Champion and Turbo Magazine "Driver of the Year." Involved in the development, racing and business aspects of motorsports for over 30 years, he has also been instrumental in leading high profile multi-million dollar race teams and marketing programs for the U.S. Navy, Ford and Chevrolet Racing Divisions.

As factory driver and engine technologies advisor, Hoyos has set numerous drag racing records for Ford and Chevy, and set a land speed record at Bonneville in excess of 243 mph for the GM Performance/Chevrolet division. Hoyos founded and currently runs the Driven2Win Drag Racing School in Florida.

So, it looks like the LSR is game-on for Cyclone Power Technologies.

As per the website, the race car is designed by Harry Schoell and Nelson Hoyos. This steam powered streamliner is thus being set to bring the Land Speed Record for steam vehicles back to the United States. During the first attempt Cyclone will be putting in a stock 100HP Mark V engine. This is the same stock engine that the company plans to develop for consumer vehicles and it is projected to reach 160 mph, beating the current record with an engine that actually has practical use.

The Cyclone Engine was recognized by Popular Science Magazine as the Invention of the Year for 2008, and was presented with the Society of Automotive Engineers' AEI Tech Award in 2006 and 2008. Additionally, Cyclone was named Environmental Business of the Year by the Broward County Environmental Protection Department.

Frank Sherosky wrote on March 26, 2012 - 11:29pm Permalink
I received an interesting email today from a reader. It appears that Chuk Williams, the original designer of the Cyclone-Williams racer may have been ditched, axed or whatever in favor of Hoyos. Now, I do not care to get involved in company politics, but I would like to see Cyclone at least make some kind of statement as to the change in relations with Mr. Williams. As author of "Perfecting Corporate Character," as well as a reporter who covered the Cyclone-Williams vehicle, I think that would be the honest and upright thing to do. You see it makes it difficult to ask for funds from supporters, then make changes without so much as an explanation. I am pleased to see the company is expanding, and have experienced similar magnitudes of changes in my own career, but this is not good PR in my opinion; and I say that as a minor stock holder.
Frank Sherosky wrote on March 27, 2012 - 3:24pm Permalink
I just received another email from a “representative of Cyclone” with regard to my comments about Chuk Williams. Cyclone did not “ditch” Chuk for Nelson Hoyos, as the previous emailer assumed and I reiterated. It appears Chuk did not share the same vision for the project as Cyclone, and as a result, he chose to go it alone. I was told to refer to his statement on the SACA website on 3/23. However, the lack of any statement publically by Cyclone will likely let others think differently; and if I was the PR person, I would have handled that differently so there are never any false assumptions. I worked at GM where that happened a lot. Unfortunate, but life goes on. Here is what I did pick up, though: It appears that Mr. Williams and Cyclone may have had different objectives for this program, and that likely built tension over time. Was it personal objective vs. project objective? If any personal objectives were overriding, then that had to be addressed. Those have to come second to the project if the project is to fully succeed. As a member of the first Saturn car's design team, I am fully aware that differences of opinion are not evil in themselves, but a program's cadence can suffer on account of those differences, too. It's good to see that Cyclone views this more about the development of a modern-day steam engine than a personal issue. Good to see their focus is about the glory of the technology, not any one individual. Fact is, the tech has a realistic chance for commercial acceptance, and more important than any one person. If that is indeed the heart of the issue, then I would concur with the decision, especially since I am also a stockholder. This is not the time or place for personalizing the project. On Cyclone's behalf and with all respect to Williams, let me state that mobile steam power does have a great opportunity to make a difference in the world. IF it is to re-emerge as a viable option in the 21st century, then the new technology must be met with new materials, new thinking, but with a team focus. I know that Cyclone wishes Chuk well. Bottom line is, Cyclone needs a very strong and cohesive team to accomplish its goals. So, I wish the team success as I do Mr. Williams! Enough said.
robert tiller wrote on October 16, 2015 - 2:57pm Permalink
please try reach harry schoell friend from past 863 532 3512 thank you in advance for your help

Toyota's First EV Will Have a Name of BZ: Toyota BZ
First Videos From Inside The Boring Company's Las Vegas Loop
END_OF_DOCUMENT_TOKEN_TO_BE_REPLACED