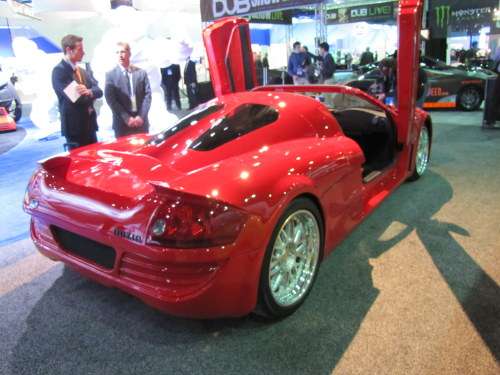 An electric vehicle (EV) today is not so green if its source for power regeneration comes from a coal plant. That is why natural gas has to be looked upon in America as more than just a fuel to heat our homes and cook our food, but as a transitional transportation fuel towards a greener future.
Advertisement

Look at the photo of the hot EV supercar by Lithium Ion Motors. What do you see? An EV only or an EV that will draw from natural gas?

The connection between natural gas and EVs should be obvious, but not readily discussed in many auto sector blogs in the same sentence, except perhaps NGV America which monitors the gas industry.

Torque News, on the other hand, has already covered nat-gas in the form of NG vehicles and stocks. For example, read: Chesapeake Energy (NYSE: CHK) $1B commitment in LNG technologies buys EV development time

Yet, despite all the green rhetoric and push toward super-green power generators from wind, solar and geothermal, truth is they simply cannot meet the incessant demands of the hungry power grid; and it is us and our increase in power-demanding devices that creates the hunger. First it was power appliances, then computers and now its going to be cars.

What About Nuclear Power?

For certain, nuclear power is a viable power solution, because nuclear fuels are the most dense sources of energy available. Unfortunately, nuclear fuels also have a nasty side effect: nuclear waste products.

For the record, safety is the primary goal in the United States today, and it is much easier to assure that adequate cooling will be available if there is only half as much heat to dissipate. So, America has smaller bu tmany nuclear plants.

In one of MNM.com original posts called The 6 Myths of Nuclear Energy, Karl Burkart clearly stated all the reasons why today's version of nuclear technology is simply not viable — too expensive, too dangerous, too water-consuming, too politically destabilizing, etc.

Then Bill Gates announced his plans to fund a viable, next-generation nuclear technology called traveling-wave reactor (TWR). Furthermore, he announced an exploration between TerraPower, a TWR nuclear company he largely funds, and Toshiba Corporation, a leader in the commercial nuclear power business. Read Bill Gates: Billions for next-gen nuclear dating back to March, 2010.

Until we build that next level of nuclear power plants that use lesser heat for safety; but, more important, incapable grades nuclear fuel for weaponry, our only viable options in the meantime will remain as coal and natural gas to feed the grid that EVs will use. Yet, despite all the industry and media hype on clean coal, natural gas has stepped into its position as the transition poster boy with good reason.

Although nat-gas doesn’t have the stored energy level of coal or nuclear fuel, it is still potent and leans far more towards green than coal. Furthermore, geologists have found the presence of vast quantities of natural gas, which have been locked deep underground in shale rock formations long before mankind ever appeared on this planet; and the knowledge surrounding shale deposits has been known for decades. But thanks to a new technology process called hydraulic fracturing or fracking developed in recent years it is now possible for gas companies to extract it.

Granted, fracking can contaminate the water IF it is done incorrectly. Fact is, we have the technology to avoid that problem by shielding the drilling through the water sheds. Furthermore, the areas where the gas exists is inside non-permeable rock and shale formations at distances far below the water shed.

Nonetheless, the process still has been heavily criticized by environmentalists because of the chemicals used, the amount of water required and the potential for that to enter the groundwater as contamination. I have yet to see the industry respond sufficiently to quell those concerns.

For the record, most natural gas is consumed by utility customers during winter to heat our homes. That is why gas utilities lock up fuel supplies year-round, when the demand is low and the prices are cheap. They even enter into contracts with gas producers and markers, including taking physical delivery of gas and injecting it into large underground storage fields for withdrawal during winter.

Of course, the price of fuel to the consumer reflects all of those costs, including transportation and storage, which often represents about two-thirds of natural gas bills, as it does in Missouri.

In my own state of Michigan where gas is plentiful and more often capped, I opted to accept an offer from a supplier because I discovered the rates per cubic foot were cheaper during winter months, as compared to spiked prices by Consumers Energy; and it gets delivered via the very same pipeline.

Point is, Consumers Energy doesn’t pass on their savings garnered during the year to consumers. In Michigan, for example, we pay the going spot price in winter like everyone else, which is often driven higher by demand in the northeast, plus the yin and yang of the futures traders and speculators. I have nothing against speculators, as I view and trade like one myself. Second point is, I have simply learned to hedge my own power needs now.

As coal plants get replaced by more cost-effective nat-gas plants, the commodity will naturally rise in price. That’s simply the law of supply and demand in motion. However, the supply in America’s shale is sufficient to carry us to hydrogen.

And that’s where we need to go as a nation, hydrogen-powered fuel cell cars. Even trucks will be able to burn hydrogen which is why a transition of the trucks in America to natural gas is visionary energy plan, such as the one described by T. Boone Pickens.

Think about it, the propulsion system of the Chevy Volt is already half-way there. All it needs is to replace the generator motor with a fuel cell, thus bypassing the need for the expensive lithium-ion battery, because a lesser expensive battery could be used, not to mention replaced by an ultra-capacitor.

Like all technological innovations, though, the costs do come down over time. Problem today is that only the early adopters who have the money can afford it right now. I do not view a $399 lease payment for 4-seat vehicle very affordable, even for a small family.

When I attended the Business of Plugging In 2011 in Dearborn, Michigan last week, I was not surprised by the technology or the rhetoric of the suppliers. Where an industry didn’t even exist just four years ago, now we have giants entering the charging stage, like General Electric (NYSE: GE) and Eaton (NYSE: ETN).

The entry of fracking has opened up the extraction to natural gas to a level whereby there is now greater supply than demand. While that is good for consumers, realize that all the savings are not passed on to consumers either. It flows to the bottom line of the industry.

That is why some traders believe it may be a good time to trade nat-gas as a long-term commodity play. Despite volatility spikes which can drop prices even lower, it will likely go up in the years ahead, especially as more and more EVs come on line to draw from the power grid.

Bottom line here is, it’s only a matter of time before the EV count will have a profound effect on the grid, and natural gas will be our primary natural resource to feed it. And regarding all that talk about charging at night, I never did buy into an American society that likes being restricted. We’re much too demanding and are already expecting immediate charging satisfaction.

So, whether you buy a nat-gas powered vehicle or an EV that plugs into the grid, you will still use natural gas at some point along the way.