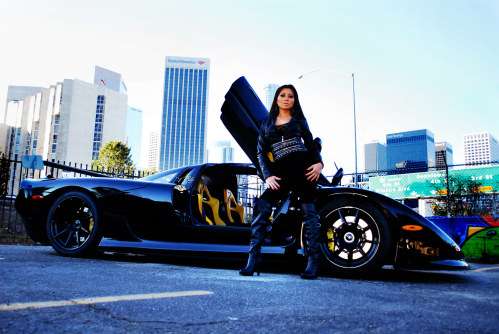 In an unusual vehicle launch, SEI Engineering used three extreme music videos from model/recording artist, Abby Cubey, to kick off the introduction of the 838 horsepower, 240 mph RaptorGTR, with an option to produce 1212 horsepower in a limited production of 12 vehicles.
Advertisement

The first impression of the news release with the music videos made this reporter (along with others) wonder whether the focus was the car or a promotion for Abby Cubey and her Feel My Fire music video. Fact is, the music videos were intentionally part of the launch by SEI Engineering, owned by J. Todd Wagner, as the marketer and distributor for the Mosler RaptorGTR.

For the record, J. Todd Wagner is the former Director of Engineering & Design for Mosler Automotive, one of the world's premiere sports car manufacturers which still produces the MT900 supercar; and where Todd worked for over seven years, but is now distributor. Yet, upon further investigation and other web reports, Mr. Wagner is also reported to have more than previous employment and now distribution connections to Mosler Automotive, as its General Manager and Vice President of Global Operations is Jill Wagner. So, it appears, at least on and perhaps under the surface, this news release by Mr. Wagner may be a breakaway event in more ways than one.

Nonetheless, it is the car that this reporter prefers to concentrate, more so than any video or any assumed internal drama. Fact is, the RaptorGTR can stand on its own merits.

According to the news release, though, sent to me by Mr. Wagner, the Mosler RaptorGTR is indeed a more powerful vehicle, and was intentionally launched with a promotional music video by an artist/model, Abby Cubey for marketing reasons. Abby is thus promoted as the definition of an international recording artist, who sings in seven languages: English, Chinese, Italian, Spanish, Russian, French, and Tagalog. Her father is from Europe; mother from Asia; and she was born in Hong Kong, but educated in America (Georgetown Univ).

The marketing goal appears to make a global, big-splash statement, using the universal language of music combined with a large array of languages as an ideal mechanism to launch a new world-class vehicle into every market around the world. Abby is initially releasing the song in English, and she will release the song in a new language every month for the following six months starting with Chinese.

The 2012 Mosler RaptorGTR initially features 838 hp from a twin-turbocharged 7.0-liter V-8 and a curb weight of just 2,580 pounds. Official word via Supercar Engineering, Inc. (SEI) says RaptorGTR #001, formed from a Mosler MT900 owned by Mr. Wagner, will blast from zero to 60 mph in just 2.6 seconds and hit a top speed of 240 mph, nipping at the heels of the Veyron. The car’s low weight also helps it come to a halt from 60 mph in only 95 feet—on par with a ZR1—and achieve 1.4gs of steady grip.

At 2580lbs (1173kg), the ultralight street missile is built with carbon-fiber LeMans Prototype construction concepts to keep the weight radically lower than any car in the hyperexotic category, while remaining extremely safe. Like the Audi R18 that protected its driver through an intensive impact with a barrier during the 2011 LeMans race, the RaptorGTR features a central carbon-fiber safety cell surrounded by consumable elements to absorb impact energy.

After completing a performance driving school with the RaptorGTR, for an additional $70,000 the vehicle can be upgraded by Supercar Engineering, Inc. with a 1212hp CubeyGTR package. This rocket has more than 1hp/kg and nearly DOUBLE the power-to-weight ratio of a Bugatti Veyron. This upgrade package will be limited to 12 cars.

Also according to the news release, in addition to the immense power upgrade, this limited edition vehicle features a front clip designed after Abby’s exotic eyes.

As additional cooling is required to absorb the immense heat that 1212hp emits, an extra radiator is installed in the driver’s side pod, and the intercooler receives additional air flow via ducts integrated into the rear hatch.

The visible turbos concept was inspired by the F-22 Raptor fighter jet. By virtue of being directly exposed to the atmosphere, the turbos generate a truly unique fighter jet soundtrack for the driver. The sound of the turbos is unlike anything previously experienced in the automotive realm.

Based on that feature, music-video producers, Paul Drago & Omar Rojaz, have adopted the turbos as an instrument in Abby Cubey’s Feel My Fire song and music video. China will certainly be the largest market for the RaptorGTR, so a Chinese version of Feel My Fire will be released in mid December.

It was surprising that the base price of the vehicle was not mentioned anywhere in the news release, as if that was common knowledge. Again, that required additional investigation which hinted at an eye-popping price of $700,000. Then again a Veyron isn’t cheap either. But add another $70,000 for the Cubey GTR package and you total $770,000 for that 1212 horsepower.

-----------------------
About the Reporter: After 39 years in the auto industry as a design engineer, Frank Sherosky now trades stocks, futures and writes articles, books and ebooks like, "Perfecting Corporate Character," "Awaken Your Speculator Mind", and "Millennial World Order" via authorfrank.com. He may be contacted here by email: [email protected] or via his Twitter i.d. @Authorfranks
__________________________________
Additional Reading:
CODA Automotive touts 150 mile EV range at 2011 LA Auto Show
The BMW i8 introduces LA to the electric hybrid supercar
Pike Research forecasts 1.5 million EV charging locations in U.S.A. by 2017

Paul Drago wrote on November 24, 2011 - 5:44am Permalink
When we were recording the song, I thought it would be cool to have a car sound it in. I searched the internet for that. I invited Todd over and he suggested that we use the real Raptor car sound. So at 2:00 AM, in the street, waking up the neighbors, Amber and I recorded the actual sounds of the car and I we mixed them right in to the recording. So the turbo you hear is the real thing. The composition was written by Abby Cubey, Paul Drago, Omar Rojaz and Amber Nicole Irish and is a Paul Drago/Omar Rojaz Production or JOJOKID Music. The song and video were released on CDBaby , iTunes and other download sites.