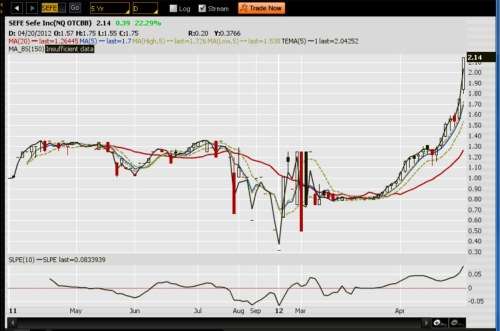 Founded in 2004 as Midnight Candle Company, SEFE, Inc. changed its name in July 2010. Headquartered in Scottsdale, Arizona, little did the general public know that SEFE, Inc. would so quickly get compared to other alternate energy giants such as First Solar; yet, it favors atmospheric energy over solar energy.

And speaking of footprint, unlike other forms of energy collection, SEFE has virtually no carbon footprint. So, it’s greener than green alternatives.

The system’s design employs an airborne carrier, which can be a high-altitude weather balloon or blimp, to send a conductive cable into the atmosphere, where it is suspended and tethered in constant contact with a ground unit. Attached to the conductive cable is a “black box” which converts the naturally occurring electricity into usable form. The electricity is sent down the conductive cable to a power generator, which, in turn, can send the power to an existing electric company’s infrastructure and grid for commercial and residential consumption. This platform generator also can convert the electricity for longer-term storage.

In plain English, it captures static electricity from the atmosphere and makes it usable for human function such as mining, manufacturing, and construction companies; utility companies; and mining relief organizations. The system could also reconvert the alternating current back into direct current form for longer-term storage in banks of batteries.

Its history record on its website records its first approach to atmospheric energy:

In 2008, SEFE began research into the possibility of capturing pervasive electricity from the atmosphere into a usable commercial form. The company filed a patent application for an Atmospheric Electrical Generator, with the patent awarded as #7,855,476. During that time period, a patent application was also filed for a Dynamic Electrical Converter System, which would be the conduit between the static electricity and energy storage.

Then, in 2009, the team developed a prototype to field test the functionality of capturing and converting energy from the atmosphere. During this testing phase, the team found that atmospheric electricity holds relatively constant, with no great fluctuations. This finding accelerated testing, in that the team could now be assured that the unlimited and continual supply of electricity warranted further exploration. To this end, patents were filed for an Atmospheric Static Electricity Generator and an Atmospheric Electrical Generator with Change of State.

So, when you think about it, their website really says a mouthful when it states that it isn’t alternative energy, because alternative energy—like wind farms, solar arrays and the like—actually need to create electricity from some other means.

Why is this company getting so much attention in the past few weeks, though? Reason is, investors see the potential, not to mention its target as a takeover by larger companies such as General Electric (NYSE: GE), for example, which already has a major interest and stake in windpower. It’s getting article attention from MarketWatch.com and a host of other financial news sources as well; and the reason is simple. SEFE’s patent bin alone is larger than the patent bin that First Solar (NASDAQ: FSLR) had when it went public.

The greener and more natural our power sources become, the more ready will out society be to attain full independence from fossil fuels as a transport fuel.

That’s why SEFE calls it True Energy, because it’s not an alternative to anything. It IS the source—unadulterated, carbon-free, always-on and without all the inherent issues and potential dangers of nuclear, coal-fired, hydro-electric or other types of power.

True Energy is pure, and it is ubiquitous. So, think everywhere, the future of power. SEFE technology is merely the harness, while business and automotive is the conduit as usual.

Of course, there is a long way to go to get this kind of thinking contributing to the national grid in a meaningful way.

Theteacher wrote on April 23, 2012 - 4:14pm Permalink
You wrote: "The greener and more natural our power sources become, the more ready will our society be to attain full independence from fossil fuels as a transport fuel." That sounds absolutely wonderful. But, Have you carefully thought it through?? Has America thought this through? The EPA is shutting down America's natural resources. How do you think that is going to work out???
Frank Sherosky wrote on April 23, 2012 - 8:50pm Permalink
First things first: I'm no tree hugger, albeit I do, considering my asthma, prefer clean air. However, fossil fuels will not go away in my lifetime, (which isnt that long of a wait anyway). They will, however, over time diminish just like every other fuel of the past. Gasoline replaced coal syngas and kerosene, for example. And gasoline will be replaced by nat-gas, but again over time. After that, electrification of autos powered by hydrogen or some other source will likely meet the needs. America is not without natural resources or ingenuity that can be harnessed; nat-gas is certainly one of them that is at least cleaner, more green than gasoline in the sense that it can burn more completely. Your comment,though, "The EPA is shutting down America's natural resources" is a bit puzzling to me. Not sure how to address it. Sure the EPA is restricting some uses. Over-zealous in some areas? Sure, but without the EPA we would still be breathing lead from gasoline. Now as much as I like IC engine tech, I still want them to be efficient, which is why I support HCCI, Split-Cycle, etc. I also like full electrics provided we can afford them. Bottom line is, I like to breath clean air as the next person, but I am a realist in that I know these changes take time, perhaps a generation to complete a transformation cycle. For another, all of these clean-green solutions have to be economically feasible. Yes, we will be green as a nation - eventually. I simply cannot put a date on it. And technology is making it happen as we lead it toward solving the major hurdles. This article merely reflects a potential solution or part of a collective solution. It will take time, and all have to be patient, but not so patient that we give up and keep things as they are. I'm all for that pipeline from the Bakken, provided that the engine tech advances so we sip the stuff rather than guzzle it.
matthew wrote on April 30, 2012 - 9:41pm Permalink
All i have to say is has a little boy i have always wonder if there was a power that we could get from the atomspere. Even on my first job shadow i ask a hi power line engineer if and when we could, harness lighting he sayed there's now way to, shore power alone. i believe this is just a much much smaller scale because there has to be some kind of charge in the air to support that raul power. its just when it comes together we get lighting. something to think and wonder about. ah ah ah.

Elon Makes a Cybertruck Statement With an Action, But Quiet in Words
Tesla's Record Month in China: Doubled Registrations in March 2021
END_OF_DOCUMENT_TOKEN_TO_BE_REPLACED