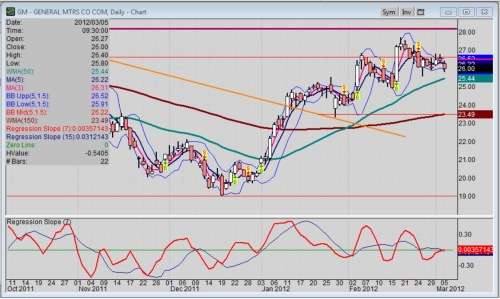 If you were expecting a breakout to the upside based on the news that General Motors Company (NYSE: GM) will offer a dual-fuel option for the 2013 Chevrolet Silverado and GMC Sierra 2500 HD extended cab pickup trucks, you would have been disappointed today.
Advertisement

Today’s price action on General Motors Company (NYSE: GM) stock is living proof that it is the market’s reaction to news than the news itself that is important.

This may be surprising as news surrounding the temporary shutdown of the Chevy Volt line had already been acting like a weight on General Motors Company (NYSE: GM) stock. Fact is, the new announcement that Chevrolet and GMC will offer a dual-fuel option to catch the trend toward nat-gas, still wasn’t enough to drive the stock higher today. Models included the 2013 Chevrolet Silverado and GMC Sierra 2500 HD extended cab pickup trucks. Question is, will GM extend CNG vehciles to other models?

Frankly, that kind of green news should have been most welcomed by investors. Then again the market has a mind of its own.

Fact is, CNG or compressed natural gas has about 950 stations around America. Unfortunately, according to a CNBC interview with Steve Mueller, the president of Southwestern Energy (NYSE: SWN), on its Fast Money program, stated that only 400 stations are actually open to the public.

That means this is another long-term infrastructure story similar to the EV charging stations, and will likely start out more towards commercially owned vehicles. Albeit, anyone can buy the option, prices were not announced by GM. For a more detailed article, read Keith Griffin’s article, GM, Chevrolet make stunning announcements about bifuel trucks.

Fact is, astute automotive investors already realize that not all engines are nat-gas capable. So, it is not surprising the GM engine of choice for compressed natural gas (CNG) is the Vortec 6.0L V8. Most important is the feature that it seamlessly transitions between CNG and gasoline fuel systems. Combined, the trucks offer a range of more than 650 miles.

Be apprised this option requires a Tier One supplier, though. In other words, the trucks are first built in Fort Wayne, Ind., then sent to the Tier One supplier for installation of the CNG bi-fuel delivery and storage system. Then again, that is how it’s been with CNG for many years. And that is why traders on CNBC’s Fast Money prefer Navistar (NYSE: NAV) and Cean Fuels (Nasdaq: CLNE) in addition to the OEMs like GM, Ford and Chrysler.

GM stock, nonetheless, is still sitting just below a price resistance level, and far above a double bottom made a few months back. Last time I wrote, though, hedge fund participation was placing the stock once again on everyone’s watch list. Read: Price action and fundamentals make GM stock a new favorite among hedge funds .

The 50-day weighted moving average (WMA) is just below it at 25.44 and acts as a time-based support level. Furthermore, the WMA-50 just broke above the WMA-150, which can be deemed a bullish omen.

On the option front, GM stock is considered cheap, and the implied volatility is low. So, if you are planning on buying call options, the lower volatility is offering you wholesale prices as opposed to higher retail.

Should you buy GM stock at this level? Well, the general market has been on an upward slope for some time now; and, looking at it in terms of an insurance policy, it is not a young kid. Nevertheless, Laszlo Birinyi told CNBC today that we are not prepared for a possible 3-4% GDP. If that occurs, GM stock will go along for that ride that can be compared to 1995.

When challenged about pattern matching to a previous era, he held his position. Birinyi also told CNBC that the S&P will likely soar to 1700 based on his view of patterns past and present. That is another 20% beyond today’s level.

Be apprised, though, the general market acts like the ocean tide; meaning, all ships rise and fall with the volatility of the powerful general tide. In addition, this is March; and that means option expiration will be at minimum a triple witch event with stock options, bond options and options on futures expiring at the same time around the third Friday of the month, March 16th.

billy wrote on March 5, 2012 - 8:09pm Permalink
"Frankly, that kind of green news" ............................. How is that natural gas is ?green?
Frank Sherosky wrote on March 5, 2012 - 8:53pm Permalink
Natural gas is cleaner than gasoline and diesel since there are far less particulates. It burns more thorough, thus exudes less pollution. Granted, it's not wind and solar, billy, but the fuel is plentiful and able to meet national demand. The mere shift from oil on a national scale would avail clearer skies for sure than what we have at present. Justing doing it for trucks alone which normally get poor MPG will make clear difference. That will buy time until your "super green" tech becomes available on a massive scale. - Thanks for commenting.

Panasonic Updates Profit Forecast, Noting How Much Tesla Batteries Help The Jump
2022 Porsche 911 GT3 Laps Nurburgring in 7:04 With Journalist Behind The Wheel
END_OF_DOCUMENT_TOKEN_TO_BE_REPLACED