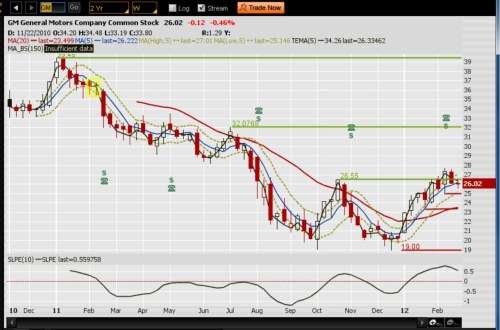 While General Motors Company (NYSE: GM) stock is presently sitting just below a price resistance level, a double bottom a few months back along with news of hedge fund participation may make the stock once again on everyone’s watch list.
Advertisement

It wasn’t that long ago that people avoided the stock of General Motors Company (NYSE: GM) as though it had the plague. Since, its IPO in Nov. 2010, the stock has languished below its IPO offering of $33 and its actual opening at $35. Now hedge funds are plowing their money into the stock, according to MarketWatch.

According to a recent news quip of seven stocks most liked by hedge funds by Meena Krishnamsetty of MarketWatch, the number of hedge funds with bullish GM bets increased by 9 during the fourth quarter alone. In fact, according to her report, GM is now the sixth most popular stock among hedge funds. Who knew? Thank you Meena.

Then again, the stock is trading at what is considered a ridiculously low forward P/E multiple. Furthermore, David Einhorn, considered one of the most successful long/short equity hedge fund managers of the past decade, is a huge fan of GM, according to Meena. For the record, Einhorn runs Greenlight Capital which returned 15.9% in 2010, and 21.5% since its inception in 1996; and all that with a market beta around 0.5.

What that tells us is that if Einhorn wasn’t any good at stock picking, he would have only reached half of what the S& P averaged during that time. Point is, that makes the GM choice significant.

Now Let the Weekly Chart do the Talking

Fundamentals and perception of fundamentals play an important part in stock selections. However, the technical traders believe the fundamentals are reflected in the stock price, as is the trend bias. And when hedge funds pour in much bucks, that is a sign the stock is going up, not down, provided of course they are long the stocks.

The weekly chart of GM still shows the stock significantly below its IPO price. However, recent market action has pushed the stock just short of broken resistance at 28, still quite far from striking range of that IPO level.

Question is, will GM get ever get higher than the IPO price. Answer: Of course it will; we just do not know when.

However, price dynamics show elements that fundamental investors do not readily see; among them are momentum and trend bias. The chart surely indicates a double bottom is in for GM stock in the 19 area. And while there are multiple levels of upside resistance, it is normal for any stock to pause at those levels before moving higher.

Right now, GM stock is pausing at the 26.55 level. In fact it broke out slightly higher then fell back.

Will this latest hedge fund news make a difference in the stock action today? It could, but bottom line is, more buyers than sellers is what propels stocks to higher ground; and not all positive news gets reflected in stock prices.

Still, GM products look great. The company is well on its way to getting its financial house in order with its latest pension fund decisions, albeit that will take much more time; and the industry is once again ready to meet demand from consumers.

So, when you view the present stock price in that context, you might agree with those hedge funds that GM stock may once again be a bargain.

[Full Disclosure: Frank does not hold any GM stock positions at this time]

Tesla Giga Berlin's New Hurdle: It's Not Only the Gov't, but Now Tesla Itself
Teslas Are Sold Out Until 2023, But The Timing May Reverse
END_OF_DOCUMENT_TOKEN_TO_BE_REPLACED