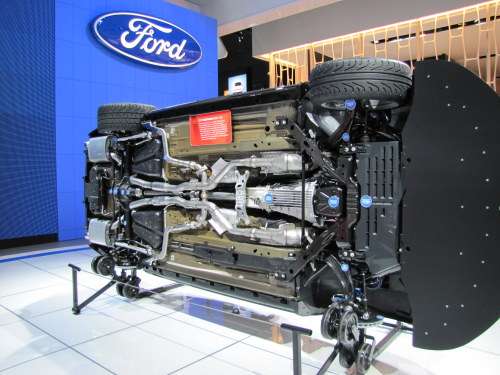 Every automobile is the result of work by teams of designers and engineers, but not always noticed by the public. To help the NAIAS 2012 crowd understand the difference, Ford Motor Company (NYSE: F) once again held its leading position as one of the best auto tech displays.
Advertisement

Whenever I attend an auto show or a technology seminar, I look for the display that communicates best the design and function of the technology so that the public comes away more informed than when they came in. As the video below will show, the Ford Motor Company (NYSE: F) display at NAIAS 2012 was no different, where design defines the style, engineering defines the fit and function, but the degree of the displays makes the educational difference.

In fact, after every NAIAS I like to award (at least in print) my favorite display from the perspective of automotive technology and education. This year, I thought Mercedes-Benz certainly sent a distinct message about aluminum body structures with its new SL displays. Read: Mercedes SL at NAIAS 2012 implies new leadership in lightweight body structures

Hyundai also had a great display showing its EV system, while Subaru had the usual engine displays showing its opposed piston arrangement. Even Fiat got into the sway with its engine displays which will show up in some Chrysler vehicles using their patented engine system.

Yet, as the combination of physics, mechanics, hydraulics and electronics come together to create a dynamic mechanism greater than the sum of its parts, technology competes with design and styling at every auto show. So, the public needs to be coerced into looking beyond the show cars. And one company usually excels in communicating technology, not only the future, but its present offerings; and not only in quantity but in quality.

Anything that helps the public become more informed is the criteria by which this reporter judges a best-in-show tech display. At NAIAS, I have to once again award that to Ford Motor Company (NYSE: F).

All you have to do is view the following video to see why. Sometimes it’s not the far out displays or the most future of the display that counts. In this case, I deemed the completeness or totality of the tech at displays by the whole company. In this respect, Ford educated the public the most, in my opinion.

Still, the ICE (internal combustion engine) is not dead; at least not yet. And where the only display at Electric Avenue worth a read in 2010 was the Nissan Leaf, complete with vehicle, charging station and a complete cutaway of the vehicle showing the SAE charge port as well as a high-voltage, 440-480v charge plug for faster charging, that technology display would have been appreciate but perhaps more ho-hum this year than last year.

Even in 2010, Ford had a plethora of display stands covering every automotive propulsion technology that Ford was working on. Some were already in the cars on the show floor, while others were future. This year, though, Ford seems to have put it all together, although there was no future tech display that awed the crowd.

However, Ford once again covered it all, in my opinion. It had the EcoBoost engine array on a wall for all to see. It had a cut-away of a multi-passenger vehicle that availed a look into the multiplicity of parts and the details under all the finish surfaces..

That’s actually a good sign in a way. It says we are going back to basics, because the electrification of the automobile is becoming part of mainstream. It also says the body structure with its packaging constraints, and with its emphasis on weight relative to MPG might be taking the lead in 2012.

So, congratulations to Ford for another host of fine-tuned focused displays; not only the finished cars, but the displays which help educate all of us on the complexities that define automobiles.

Toyota's First EV Will Have a Name of BZ: Toyota BZ
First Videos From Inside The Boring Company's Las Vegas Loop
END_OF_DOCUMENT_TOKEN_TO_BE_REPLACED