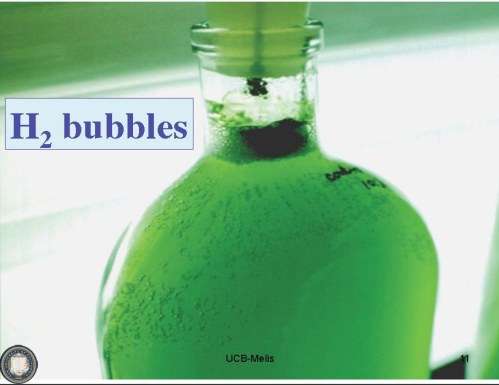 The Department of Energy recently hosted Dr. Tasios Melis, the scientist behind the DOE funded innovation that promises to triple the productivity of photosynthesis in plants and algae to generate hydrogen.
Advertisement

That chemical energy should be read as “fuel” which can be harvested from algae.

By tripling the productivity of photosynthesis, Dr. Melis’ breakthrough will dramatically improve light absorption and utilization, which could yield a 300 percent improvement in the conversion of sunlight to chemical energy.

The fuels, of course, can be made in different forms: bulk biomass (plant matter), hydrocarbons (the stuff of fuels like natural gas and petroleum products) or pure hydrogen gas, for which fuel cells can employ as an efficient way to store and deliver electrical energy for automobiles.

According to a blog.energy.gov report, Dr. Melis is a top researcher in the field of Photobiological Hydrogen Production. He is responsible for identifying three unique genetic pathways in algae, which will triple the efficiency in potential fuel production.

Tasios Melis, a Professor at the University of California Berkeley, also envisioned and pioneered the concept of “Photosynthetic Biofuels”, entailing the direct application of photosynthesis for the generation of bioenergy, in a process where a single organism acts both as photocatalyst and processor, synthesizing and secreting ready to use fuels.

The Melis lab contributed with a breakthrough in the field, when several years ago they demonstrated, for the first time, how to divert the natural flow of photosynthesis in green microalgae and to sustainably generate hydrogen gas, instead of the normally produced oxygen.

He found that by decreasing the size of the chlorophyll arrays in algae, for example, he could increase the number of cells that actually catch the sunlight and convert it into chemical energy. Essentially, smaller arrays allowed sunlight to strike deeper, reaching more sunlight-to-fuel conversion machines.

For the record, this technology is already being employed and improved upon by several industrial and university laboratories around the world, and serves as the platform for further hydrogen production research in the field.