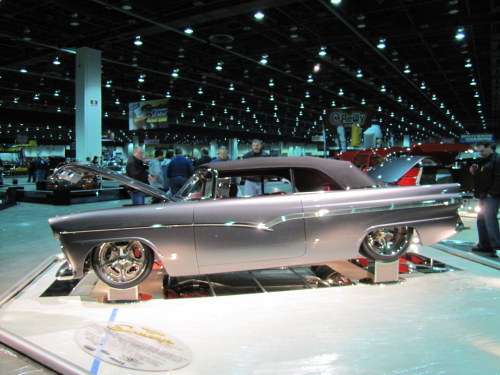 Coming this weekend: Detroit Autorama 2012 and the Ridler Award

Four major events are on the social agendas of many Detroiters during winter: The North American International Auto Show, the Super Bowl, the annual SI Swimsuit Issue, and the Detroit Autorama featuring the Ridler Award, which opens Feb. 24th and runs through Sunday, Feb. 26th.
Advertisement

Let’s go over the rules once again for the Ridler Award: Originally given to the Best Vehicle first-time shown, the Ridler Award has matured over the last forty years to reflect new ideas, changing designs and concepts. The award emphasizes three elements as criteria for the judges: creativity, engineering and workmanship.

Truth is any contender who forgets those three elements should not even bother participating. That’s why it is advised on the Autorama website that anyone building a vehicle for Ridler competition should post those words on their garage wall; keeping them in the forefront of the project. After all, only the vehicle that best represents those three areas will win the Ridler Award.

In addition, there are two hard-fast rules that all entries must meet. They are as follows:

1. The vehicle must make its first public showing at the Detroit Autorama. In other words, no other public shows. The only exposure allowed are those to develop interest or to gain sponsorship and which give credit to suppliers and/or sponsors, magazine and video build-up coverage is allowed. No articles, video footage or stories with photos of the vehicle in the finished form will be allowed until after the award has been presented.

Once the final Ridler Contenders have been determined, the field will be narrowed to 8 Finalists, which will be referred to as the Pirelli Tire Great Eight. According to the Autorama website, the following were named last year among the Pirelli Great 8.

The winner of the 2012 Ridler was Entry #1600, Bruce Ricks from Sapulta, OK with a 1956 Ford with a 427 SOHC Ford engine. I assumed early on that this car was indeed a major contender. See photo.

Personal favorites do not always win, though. In 2010, for example, my choice was 'a 34 Packard, custom boat-tail coupe called "The Myth" (two-tone copper & brown); but the Ridler Award went to the '33 Ford Phaeton called "Gold Digger" in gold metallic.

This provides living proof that the Detroit Autorama is not just for guys, as America’s greatest hot rod show that year made Tammy Ray, owner of the 1933 Ford Phaeton called “Gold Digger,” winner of the prestigious Ridler Award.

The fact is, she was the first female owner to make the "Great Eight" field of finalists in 2006 with a different show car. This time, however, she made the Great Eight and won the Ridler.

To refresh your memory from 2011, here are a few videos and links to galleries and articles. Read: Autorama 2011 setup night shows field of 30-plus Ridler Award competitors and Remembering Autorama 2010 Award Winners in Detroit

Yes, the goal here is to get you ready for the 2012 Detroit Autorama.

Now, in case you cannot make it to Detroit, be apprised that this reporter will be there, hopefully for set-up night as well. That’s when the cars are first brought in, staged and made ready for viewing. I will do the usual photo slideshow along with videos, especially on that last night when the Ridler is awarded. After that, a cruise inside Detroit Cobo Center occurs with the roar of engines and the smell of petrol.