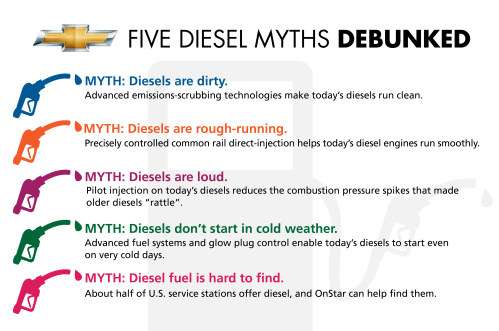 Set aside all the notions you may have had about American automakers not building high fuel efficiency cars. The Chevy Cruze Clean Diesel is expected to benefit from growing interest in diesel cars, and with good reason. Here’s why.
Advertisement

The planned U.S. introduction of a 2.0L clean turbo diesel version of the Chevrolet Cruze next year is expecting sales to double by mid-decade, according to market research firm Baum and Associates. That’s great news for those of use who are tired of paying high cost gasoline in vehicles that do not deliver the miles per gallon sufficiently to justify the cost of the vehicle, even with high-tech engine.

Diesels are as much high-tech as their gasoline counterparts, especially the new Clean Diesels; but the concept itself is not new. Europe believes and lives the diesel dream, and has done so for decades, because it makes economic sense.

Fact is, diesels are not new to General Motors (NYSE: GM), just to America. General Motors actually sold more than half a million diesel-powered cars across Europe, Asia, Africa and South America last year, including 33,000 Cruzes.

The North American introduction of a diesel engine on Cruze – one of the top-selling gasoline-powered cars in the U.S. in 2011 and General Motors’ best-selling model globally – is expected to establish Chevrolet as the only domestic automaker offering an American-manufactured, diesel-powered compact car with a European-American developed engine. Read: Chevrolet confirms diesel for 2013 Cruze.

“Even with high fuel prices, we’re seeing more consumers willing to invest in more advanced technology, fuel-efficient vehicles,” said Allen Schaeffer, executive director of the Diesel Technology Forum, a non-profit educational organization. “We’re really excited about what the Chevy Cruze brings to this segment. It’s already a successful car in its fuel efficiency and market acceptance. With GM’s advanced clean-burning diesel technology under the hood, Cruze stands to be a game changer.”

For the record, diesel engines, which are based on compression ignition, have long been known for their fuel efficiency and spirited performance. Due to a higher compression ratio and greater energy density of the diesel fuel itself, diesel engines are able to produce more power than equivalent displacement gasoline-powered engines.

Compact cars with diesel engines typically deliver more than 40 miles per gallon, spirited performance, strong durability and high lease residual values. So, these are all attributes Chevy expects to be true of the Cruze Diesel as well.

So as to dispel any negative myths, the 2.0L clean turbo diesel engine coming to the Cruze has resolved drawbacks consumers associated with older generation diesel cars, such as excessive engine noise, exhaust soot and smell. Precisely controlled common rail direct-injection fuel systems create a smooth-running engine. Furthermore, about one of every two U.S. service stations now offers diesel fuel, up from one in three a few years ago, according to Diesel Technology Forum.

“Consumers realize that today’s diesel cars are cleaner, less noisy and faster than they used to be, and have a relatively lower cost of entry than some hybrids and EVs,” said Michael Omotoso, powertrain analyst, LMC Automotive. “Consumers also are more receptive to diesel fuel because of $4 per gallon gasoline.”

Historically, diesel cars have sold strongly in Europe, where the fuel is less expensive than highly taxed gasoline. In the United States, diesel fuel typically costs between 25 and 40 cents more than gasoline, but the difference has been trending downward the past couple of years, according to Schaeffer. When factoring in diesel’s relatively higher fuel efficiency, he said the cost differential appears less significant.

“Small displacement diesel engines could fill an important niche in Chevrolet’s diverse four-cylinder lineup,” said Mike Weidman, Cruze marketing manager. “We recognize this technology’s considerable appeal, particularly with young male car buyers, and we are ready to win them over with quality, torque and fuel economy.”

Competitive Engine Technologies On The Rise

I noticed there were a few diesel-oriented displays, but there were actually more split-cycle and opposed piston engine companies. Surprisingly, there was very little on HCCI (high compression combustion ignition), which functions like a diesel except on gasoline.

One thing unique about one of these technologies is, the diesel cycle can be adapted. In particular, consider the split cycle, which I have covered from time to time. A single cylinder acts as an air compressor, while the others handle the power and exhaust. Point is, this future technology especially allows for the diesel to have a growth path even beyond present technology on the road. So, while an entry in the U.S. is welcomed, be apprised it is not limited either.

That's good for the future of the environment as well as the economy, as the government admits the vast majority of propulsions for autos around the world will still be IC engines by 2030.