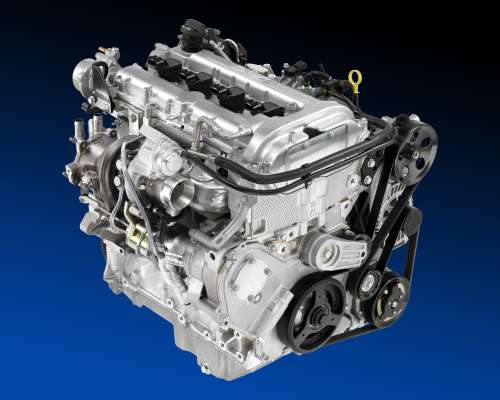 The Ecotec 2.0L turbo I-4 engine powers the all-new 2012 Buick Regal GS, and is now one of WardsAuto World’s 2012 “10 Best Engines” for North America.
Advertisement

This award by WardsAuto World recognizes the four-cylinder as industry leader in the 2012 Buick Regal GS. It is built at General Motors' Spring Hill, Tenn. powertrain facility.

While Buick, a division of General Motors company (NYSE: GM) is more often known as a modern luxury brand, offering vehicles with sculpted designs, luxurious interiors with thoughtful personal technologies, along with responsive-yet-efficient performance, the engine award from WardsAuto World returns Buick to the world of engine power performance, albeit in a smaller displacement than in the past.

Just look at the power-to-displacement ratio. According to the GM news release, the Ecotec 2.0L turbo’s 270 horsepower is the highest specific output of any GM production engine, and at 135 hp per liter, is the most power-dense engine certified by the Society of Automotive Engineers.

“The turbocharged Ecotec 2.0L belongs on the list this year because it makes an outrageous 135 hp per liter in the Regal GS, and it’s a blast to drive,” said WardsAuto World Editor-in-Chief Drew Winter. “This engine delivers a level of power and sophistication that redefines Buick.”

The Regal GS achieves 0-60 mph in less than 6.7 seconds and runs the quarter-mile in 15.2 seconds at 98 mph. It also recently claimed victory in the 120-mph Grand Touring class at the Silver State Classic Challenge open road rally, with only a .019 deviation from a perfect time. A variation of the same engine powers the Regal Turbo.

For the record, Ward’s reviewed 35 engines from 15 automakers in this year’s competition. Winners were chosen based on several factors, including power; noise, vibration and harshness; fuel efficiency; new technology; and comparative data for similar engines.

An advanced, electronically controlled turbocharger uses a twin-scroll design to increase power. Each of two scrolls on the turbine is fed by a separate exhaust passage – one from cylinders one and four, the other from cylinders two and three – to virtually eliminates turbo lag at low engine speeds, giving the engine immediate throttle response associated with a naturally aspirated high-performance engine.

Based on the recent acquisition of Controlled Power Technologies by Valeo (Read: Valeo acquires electric superchargers technology business of Controlled Power Technologies , be apprised that Buick’s present turbo technology will likely be challenged in the near future with electric-powered superchargers, which virtually eliminate the lag at low speeds, as well as the inrush of power that standard and modified turbos often exhibit.

You may learn more about Buick cars and crossovers at www.buick.com, on Twitter @buick or at www.facebook.com/buick.