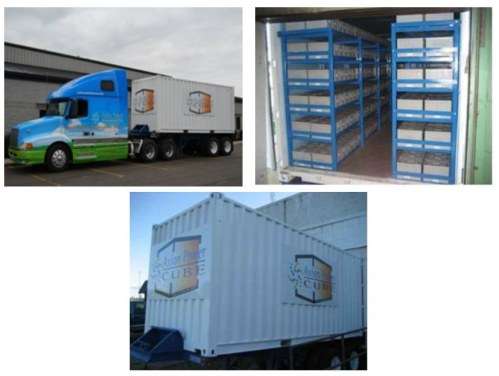 Axion Power International, Inc. (OTC Bulletin Board: AXPW), the developer of advanced lead­carbon PbC® batteries and energy storage systems, announced today that it was awarded a purchase order from SilTek Inc. confirming their participation in a Zero Energy Building in the Washington DC Naval Yard.
Advertisement

What does this have to do with autos? Plenty. Proving scalability and extended usability, its future applications to the base technology include automotive mild hybrids. The same PbC® battery technology of Axion Power International, Inc. (OTC Bulletin Board: AXPW) has the potential to fill the big hole in cost structure between traditional lead-acid batteries and lithium-ion, and has a potential to be a major solution in the increased use of automotive stop-start systems.

For the record, this technology has been covered before at TorqueNews. Read: Axion Power to improve stop-start systems with new PbC battery electrode and Axion Power (OTCBB: AXPW) advancing battery tech into micro-hybrid vehicles

According to the latest news release, though, a building array like the DC Naval Yard proves the technology has extended usages. For the record, PbC technology is proprietary to Axion Power and is protected by multiple patents issued over the last decade.

Basically activated carbon is substituted for lead in the negative electrode in an otherwise traditionally constructed 'lead-acid' battery. But when compared to traditional, AGM, advanced lead-acid batteries or even lead-acid with carbon additives, the new PbC lead/carbon chemistry creates a much longer lifespan (3 to 4 times), much greater charge acceptance in partial state of charge applications (10 to 20 times more depending on the "state" of the battery), as well as faster re-charging capabilities (again depending on application – at least twice as fast but up to 10 times faster).

When compared to some of the more exotic chemistries such as lithium ion, the PbC battery offers a much stronger safety profile, operates at higher efficiency at higher C° or sub C° temperatures and most importantly, has a total life cycle cost structure that is a fraction of the total life cycle cost of these more highly publicized exotic chemistries.

Back to the auto use again, note my article in September labeled it as a disruptive technology; and indeed it is. Axion's battery electrodes supports stop-start technology, which will likely have far greater volume than EVs in the next 10 years for sure. Effectively, this technology supports IC engines in their quest to reduce CO2 emissions as well as fuel mileage. An IC engine that shuts down does not pollute and does not burn gasoline. As an interim, it’s a great step forward towards increasing green for autos.

Of course, this latest news release focused away from autos and toward a grid application at the DV Naval Yard. However, acceptance of the technology by the Navy is what’s key here; and in this case proves two key attributes - extended usability and scalability.

Axion will be providing an array of its PbC batteries, system electronics and battery management system that together will serve as an example of Axion's "mini-Cube" concept based on the scalability, up or down, of its primary PowerCube™. The mini-Cube, which will provide demand response energy storage that will be grid network tied, will be linked to a 32kW solar panel array and will supply standby power service for this Zero Energy Administration Building. The project is underwritten by the US Navy, and the purchase order calls for Axion's work to begin in January with the full 36 PbC battery mini-PowerCube system to be completed in the first quarter of 2012. The principal contractor for the project is Herndon VA-based SilTek Inc.

Axion Power Chairman & CEO Thomas Granville commented, "Although this is a small project, in terms of dollars and number of batteries, it is a significant step forward because it comes on the heels of November's ceremonious integration of our full PbC PowerCube onto the PJM network (a regional transmission organization founded in 1927, ensures the reliability of the high-voltage electric power system serving 58 million people in all or parts of 13 states and the District of Columbia). At the unveiling ceremony with PJM, we spoke of the scalability of our PowerCube technology; this project will be the first deployment demonstrating the range (from small 10kW residential units, to stacked cube modules providing 20MW) of this application. It is also an important step forward because of the strong interest the US federal government in general, and the armed forces in particular, have in zero-energy projects that reduce carbon footprints. Because of our PbC battery's extended cycle life, high rate of charge acceptance and fast re-charging capability, Axion is able to offer metrics that make economic sense especially when compared to other more exotic chemistries that are currently in the marketplace. We are pleased and honored to be working with SilTek and the US Navy on this important project."

The Stella Group, Ltd, President Scott Sklar commented, "The PbC batteries offer the right capabilities with their hybrid storage able to handle varying loads for net-zero energy buildings and smart grid applications that are being scaled by the US Navy and other services within the Department of Defense. In addition, PbC batteries are 100% recyclable and made in the USA." Sklar, early advisor to NAVFAC on this project and various other ongoing DOD projects and Adjunct Professor at The George Washington University, stated further, "Both the Department of Defense and private industry are increasing their focus on renewable energy as a means of decreasing electric grid failures, reducing carbon and particle-emitting coal-fired plants, strengthening national security and diminishing US dependence on foreign oil. Utilization of advanced energy storage technologies, particularly economically feasible technologies such as PbC-enabled PowerCubes (of all sizes), can be a leading means of accomplishing those goals."

Axion has developed and patented a next generation energy storage device that won the prestigious Frost & Sullivan Technology Award for North America in the field of lead-acid batteries. According to Frost & Sullivan, Axion's new PbC batteries have "the potential to revitalize the lead-acid battery industry by breathing new life into an established technology that is not well suited to the requirements of important new applications like hybrid electric vehicles and renewable power."

Axion Power International, Inc. is now the industry leader in the field of lead-acid-carbon energy storage technologies. Axion believes this new battery technology is the only class of advanced battery that can be assembled on existing lead-acid battery production lines throughout the world utilizing Axion's proprietary carbon electrodes. Axion's future goal, after filling their plant's lead-carbon battery production capacity, is to become the leading supplier of carbon electrode assemblies for the global lead-acid battery industry.
For more information, visit http://www.axionpower.com

-----------------------
Full Disclosure: At time of publication, Sherosky, creator of the auto sector charts for TN, is usually neither long or short with the mentioned stocks or futures, except in this case whereby he holds a small position for his long-tern IRA. However, positions can change at any time. None of the information in this article constitutes a recommendation, but an assessment or opinion.