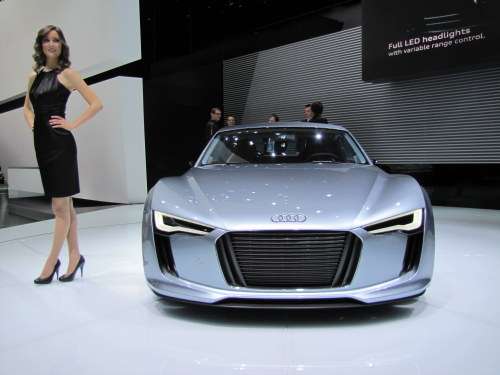 Autos designed for foot size than styles at Zappos

Design integration of an automobile involves far more than just placing a dummy called Oscar into position then setting up the steering wheel and the driver seat. Few people realize that integration of the human foot relative to the pedals is crucial to a safe vehicle. Likewise are the shoe styles we choose to drive in.
Advertisement

Beautiful models accompany many of the vehicles at auto shows like the NAIAS in Detroit. Some luxury autos have included the feature to adjust the pedals to suit the driver, much like we adjust the seat, the steering wheel and the mirrors. Still, foot size and occupant percentile is a major design consideration and challenge for automotive designers.

Fact is, more accidents occur due to sudden acceleration from failure of the driver to press the proper pedal, like the brake instead of the accelerator. And, according to transcripts and news releases, that’s been the position of Toyota in many of its sudden acceleration cases.

Moreover, every class of automobile attempts to accommodate the largest field of foot sizes possible within the population. While the federal requirement is often the 95th percentile for most rules, automakers shoot for the higher 99th percentile to grab the larger part of the market.

Those familiar with the GM system with regard to vehicle integration would recall designers using a CAD system with 3D models of various foot sizes to place the pedals so as to meet federal requirements. That, however, is merely the minimal legal requirement. GM even has a special shoe size called “Big Foot” that it uses to ensure that the work boot is fully accommodated.

Problem is, designers can accommodate multiples of foot sizes, but not style of footwear. That is the responsibility of the driver. No amount of detailed attention by the automakers can ever account fully for a poor choice of footwear. Soles can range from slippery to grabbing too much, especially with carpeting.

One footwear company like Zappos.com already touts unwavering focus on superior customer service. They even allow customers to rate footwear with 1 to 5 stars according to three categories of criteria: overall, comfort and look.

Will companies like Zappos that sell mainly via an on-line presence lead the way, by educating their customers about the importance of selecting footwear with driving as well? In the case of Zappos, with their on-line rating system already in place, the company is probably best prepared to serve the driving public.

Bottom line: Whether you shop for shoes in a store or online like Zappos.com , the responsibility of choice is always yours. However, choose your next pair of shoes or sandals to suit your lifestyle, but also be cognizant of your footwear’s suitability for driving.

LG's New EV Battery Plant Is a Welcome News for Tesla
Tesla Giga Berlin's New Hurdle: It's Not Only the Gov't, but Now Tesla Itself
END_OF_DOCUMENT_TOKEN_TO_BE_REPLACED