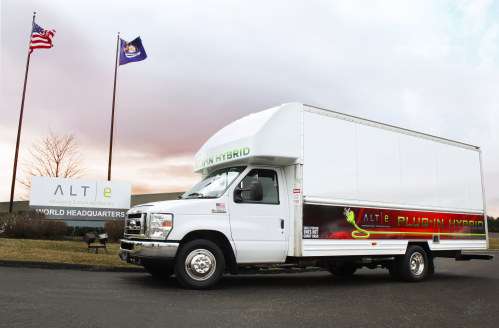 ALTe began engineering development on the Ford E350 platform in late 2011 reflecting the popularity of this vehicle in the fleet industry. There are currently more than 125,000 E350 vans of the 2004-2010 model years registered to corporate, government and utility fleet owners in the U.S. Because fleets typically drive two to five times the average miles of retail and individual consumers, the fuel consumption, emissions reductions and financial returns for this target market are significant.

As the developer of the first range-extended plug-in electric hybrid powertrain used to repower light commercial vehicles, ALTe will use its patented system as a retrofit into existing fleet vehicles, as well as used in “glider” applications of new vehicles to dramatically increase their fuel economy and lower emissions. Designed to replace a base V-8 internal combustion engine powertrain, the system’s patented technology improves fuel economy from 80 percent to 200 percent.

Based in Auburn Hills, Michigan, the company is headquartered in a 185,000 square foot facility where it will assemble its powertrains that will be shipped to installation locations across North America.

For the record, ALTe has already successfully implemented conversions in Ford F150 trucks, which have been driven by dozens of potential fleet customers. This new line will offer more choices to fleet managers who seek to convert their fleets to plug-in electric hybrid.

Electrifying the Ford E350 now taps an even greater market that is already in place and just waiting to take advantage of the many conversion benefits.

“This successful conversion is another example of how ALTe’s plug-in electric hybrid powertrain will revolutionize the fleet industry,” said John Thomas, CEO and co-founder of ALTe. “With this new conversion, ALTe sees a huge opportunity to reach more fleet customers and show them how their used fleet vehicles can gain a second life with better fuel economy when equipped with an ALTe powertrain.”

ALTe’s road tests revealed that this E350 cutaway chassis prototype can drive approximately 25 miles in an all-electric mode and then deliver nearly 15mpg in a charge-sustained mode. These performance levels should continue to improve as ALTe incorporates production level components and refines various engineering algorithms.

For a typical fleet vehicle that drives 45 miles per day, the combined mode fuel economy would be over 30mpg, while a similar Ford E350 cutaway chassis with a V8 engine is only able to achieve less than 9mpg, based on data provided by major fleets.

ALTe will deliver the E350 prototype to its first potential fleet customer for evaluation this month, with plans to build more prototypes for customer evaluations throughout the year. ALTe continues to target a Spring 2013 product launch date for the U.S. market.