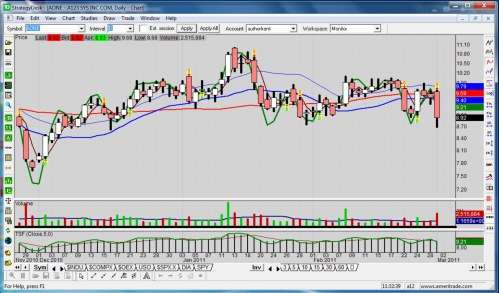 Despite 2010 total revenue being up and product revenue being down, A123 Systems (Nasdaq: AONE) stock appears shaky due to net earnings loss of $1.56 per share.
Advertisement

One look at the daily stock chart of A123 Systems about two hours after the opening bell, and you find today’s market action from the open to be to the downside.

Sometimes it’s not the news but the market’s reaction in the form of price dynamics to the news that tells the story.

A look further out in time finds price support at the 6.32 level dating back to August, 2010. However, the daily chart also shows a higher support level at 7.63 in late November. Question is, will the market test these lows?

According to the News Release

David Vieau, CEO of A123 Systems said, "During 2010 we more than doubled A123's worldwide manufacturing capacity on an annual basis, and put in place the foundation to support rapid growth in the years ahead.

He added, "A123's momentum is strong and we have expanded our portfolio of blue-chip customers in each of our target markets. We were awarded a production contract with a major North American automaker for an electric passenger car that is expected to enter the market during 2013, and we were recently selected by three new customers for commercial vehicle programs that we expect to enter production starting in 2012. In addition, we believe that A123's selection by AES to provide energy storage systems for a second power plant in Chile, combined with our work with power generation equipment manufacturers, reinforces our worldwide leadership position in the electric grid market."

The bright spot that may have buyers coming in at the dips may be the statement that the company expects to see “an inflection point in its revenue in the second quarter of 2011 with several customer programs scheduled to enter volume production.”

The company is not out of cash, though. A123 Systems had cash and cash equivalents of $216.8 million at December 31, 2010, compared to $300.8 million at September 30, 2010. The change in cash was primarily related to capital expenditures as the company worked toward completion of the first phase of the company's capacity expansion.

Perhaps the market understands that, and explains why some are voting to buy shares on dips as others sell their shares. Again, the next price support levels are 8.75 then 7.63, in case the market changes its mind.

A123 Systems is a developer and manufacturer of advanced Nanophosphate™ lithium ion batteries and systems. The company supplies the battery technology for the Chevy Volt.