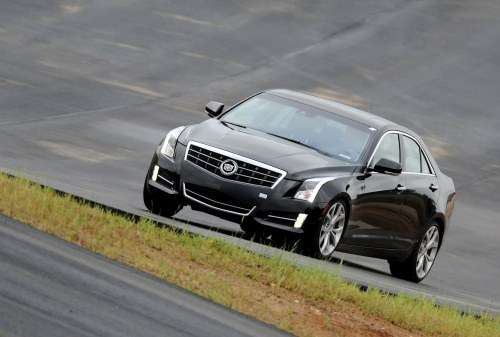 2013 Cadillac ATS may be lightest in segment, but GM misses tech-setting opportunity

What this country needs is a company and a brand that will lead the auto industry with lighter, safe cars that do not compromise performance and sets the tone for the future; and, while the 2013 Cadillac ATS might be aiming to please, it is not enough.
Advertisement

Lightest car in its segment? Really, is that enough considering future MPG mandates? Yet, that’s what the General Motors (NYSE: GM) news release said. And while there may not be any compromise in performance with its use of Smart Materials, GM still made a compromise in its judgment to take advantage of the opportunity to be a real brand leader.

So far, so good, must be the thinking at GM; not too surprising. So it appears this is more of the old GM thinking holding back another one of its key brands. They surely did it with Saturn.

Question: Shouldn’t the 2013 Cadillac ATS be more than just a nimble performer that barely beats the segment‘s mass numbers? How about a real industry trend setter that beats the present standard by a quantum leap?

GM did it with the Chevy Volt propulsion technology. Yet, with the Cadillac brand it takes the safe approach; making the ATS just like the other segment brands, with just a bit under its mass. That lacks chutzpah, in my opinion.

Once again, GM is saying to America and the world that it will not lead the industry with lightweight vehicles; a goal that should be at the top of its engineering to-do lists. If not with Cadillac, then who? The Chevy Cruze? Nice idea, but the cost for manufacturing process changes cannot be justified. The brand is too small.

When GM says engineers set out to make the all-new 2013 Cadillac ATS as light as possible, there is a caveat. Sure, they used advanced materials to minimize weight throughout the compact luxury sports sedan so as to not compromise performance capability. That’s the issue - GM held back Cadillac from doing what its heritage says it must do - set the trend for the entire corporation.

Fact is, a lightweight car that will lead the industry has to do more than just get below some segment mass goal. Where is the balls-out (steam engine term folks) body technology like that of the new aluminum bodies of Mercedes or the Tesla Model S for that matter? If there was ever a time, it is now; and GM and Cadillac missed a golden opportunity.

Yes, key parts such as an aluminum hood and magnesium engine mounts help the situation. Once again, GM restricts Cadillac to think is terms of me-too achievements.

ATS, for example, achieves a curb weight less than 3,400 pounds, and highway fuel economy well over 30 mpg. Keeping weight down also enabled balanced distribution of vehicle weight that helps delivers a world-class driving experience. I get it; I really do, but I also expect more from a GM division that was once the envy of the industry. One visit to the GM Heritage Center and you get the message.

Albeit, the 2013 Cadillac ATS would surely fill my desires as a luxury automobile, but not when I look into the near future where 55 plus MPG is to be the corporate goal. So, is GM once again counting on its halo car, the Chevy Volt, to take the pressure off? Again, no surprise there; and to think the CEO got a raise.

“We designed and engineered ATS’s vehicle architecture to deliver quick, nimble and fun-to-drive dynamics,” said David Masch, ATS chief engineer. “We distributed mass to key areas, much like an athlete builds muscle where he needs it most. This enabled ATS to achieve the performance characteristics that luxury sport sedan buyers demand.”

Fact is, that’s all they could do; and they did a brilliant job; but the goal should have been set much higher for a new car.

There are many ways to achieve weight loss for autos, but problem is not all of them fit the present form of manufacturing processes, especially for auto bodies. So, this is where the bean counters restrict engineering. And this is precisely where Cadillac should be leading the way.

Think about it. Let Cadillac set the corporate standard as the best in class by a quantum measure. GM is going to have to meet the mass goals soon anyway. Why not now? Why not with the ATS? After all, ATS is a new body segment for the brand.

Chassis parts are a different matter. That explains why the ATS engineering team focused part of its performance goals by using cast iron in the rear differential instead of aluminum, a learning taken from the performance-tuned CTS-V.

Why cast iron? Isn’t that going in the wrong weight direction? Obviously, where you place the weight is crucial to performance. For example, the media release stated the differential provides torque and rotation to the wheels, and ATS’s cast iron design helped distribute weight equally between the front and rear wheels to provide agile handling while reducing noise and vibration. Cadillac says it benchmarked against world-class competition to deliver a driving experience that is as well-tuned for sound as for ride and handling.

Unlike a differential made from aluminum, which expands and contracts twice as much in response to temperature change, a cast iron differential is stronger and retains its shape better under temperature extremes, which allows the ring and pinion gears to operate more quietly. As a result, a cast iron differential also requires less energy to operate, contributing to higher fuel efficiency. To the consumer, this means more miles between fill-ups. Brilliant thinking!

The ATS team also achieved significant weight reduction in the rear suspension by using specially engineered straight steel links, too, this time with lightening holes instead of using aluminum.

“The team focused on grams, not pounds, every day of the ATS’s development,” Masch said. “Even the smallest of changes could contribute to the overall mass goal.”

And then it hits you

There’s the rub. A team that is designing a world-class car for a brand that is supposed to be world class should have been focusing on the opposite; on pounds, not grams. I get it; the brass at GM are being led by the bean counters; no money set aside to develop what they know is the future of its entire stable of brands, a benefit for ICE, hybrids and full EVs alike.

Forget the ATS wheels for a moment which also benefited from 50-50 mass distribution between the front and rear. GM needs to do more, like prioritize an all-aluminum or aluminum/magnesium/ hybrid body structure.

If there is one thing I learned from my visit at Lotus Engineering last summer is that weight reduction pays off in performance not to mention the end, cost savings; because smart design allows a part to perform more than a single function. Just check the heritage that Colin Chapman gave the world.

At least ATS used an acoustically laminated windshield and side windows that are lighter than standard tempered glass that provided better wind and powertrain noise reduction for a quieter interior. Acoustically laminated glass also offered almost double the amount of ultraviolet ray protection. See? Glass is part of the body structure.

If Billie Sutton could figure out that robbing banks made sense because that’s where the money was, then why can’t GM focus on real weight reduction with a corporate body renaissance? Isn’t that why they went bankrupt, to rid themselves of the bond debt so as to invest in new technologies?

Smart material selection and styling modifications that reduce complexity may indeed be key enablers to reduce vehicle mass, as Bob Boniface, Cadillac exterior design director, told the Automotive Press Association. And, by the way, why wasn’t I invited? But it’s the ultimate goal that is always placed in a limited and compromising position by the bean counters. And I blame the corporate leaders for failing to lead. Then again, the present CEO is not a car guy. So you get what you do not pay for.

After all the auto shows and visits to tech events like SAE World Congress, Cadillac is moving in the right direction so as to balance and retain performance with mass reduction, but it is way too slow and too small to establish segment leadership let alone industry leadership. GM needs to go much, much further to attain the fuel mileage that will meet the 2016 and 2025 mandates of the government; and lighter auto bodies are one of the king pins for getting there. Not everything can be achieved via propulsion systems.

So, once again, GM is tooting its own horn this time just meeting a mass goal that is merely industry equivalent, but not breaking any world records; or setting the pace for future manufacturing process changes which it desperately needs.

Moral of this story: Cadillac is supposed to be the premium brand for GM; and as such, it should be free to act as one. Cadillac should be leading the way with aluminum/hybrid material body structures. If there was ever a time and a product to do it with, it was the 2013 Cadillac ATS brand.

Tesla Giga Berlin's New Hurdle: It's Not Only the Gov't, but Now Tesla Itself
Teslas Are Sold Out Until 2023, But The Timing May Reverse
END_OF_DOCUMENT_TOKEN_TO_BE_REPLACED