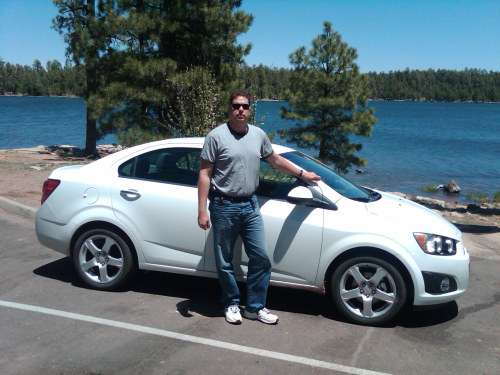 Many words describe the desired traits of automobiles, but reliability and durability can only be observed via long road trips; and the 2012 Chevy Sonic is meeting expectations by first enduring the tough miles of Quality Manager, Seth Valentine.
Advertisement

There are miles and then there are “Seth miles” according to GM’s latest news release. Both measure 5,280 feet, but a “Seth mile” is different. More extreme; more grueling; more punishing. All that rigor is part of the durability story of the 2012 Chevrolet Sonic.

For the record, “Seth miles” are named for Chevrolet Sonic Quality Manager, Seth Valentine. Each mile Valentine puts on a test vehicle is called a “Seth mile” by Sonic engineers because of his reputation for extreme testing on long road trips. Valentine’s duty: Make the Sonic the most reliable and durable small car in North America.

The efforts are obviously paying off as Sonic more than doubled the sales of its predecessor, the Aveo, in January. That's even better news, because the Chevy Sonic is the only subcompact built in the United States.

Road tests like the Seth Mile runs go a lot further than the typical ride & drive that this reporter often participated at GM, and now as a reporter. Over one six-week period, Valentine drove more than 14,000 miles in the first Sonic to leave the General Motors Orion (Mich.) Assembly Plant. Valentine drove Sonic Vehicle Identification No. 1 from north to south and east to west, across subtropical Florida, the arid deserts of Arizona, the mountains of Colorado, and the South Carolina low country. That’s quite a test drive.

In addition to amassing miles with other Sonic team members, Valentine would play typical consumer and pack the Sonic to the hilt for a family vacation.

During work trips, Valentine and his colleagues identified quality issues that needed to be fixed before Sonics were shipped to Chevrolet dealers. One lengthy journey from the assembly plant outside Detroit to Phoenix, for example, revealed an intense wind noise while traveling through a 40 mph crosswind in Texas. The wind noise was not a factor during testing at the GM Proving Ground in Milford, Mich. As a result, Valentine called the assembly plant from the road and had the problem fixed before VIN No. 2 left the factory. He took the same approach with other issues found on the road.

All this testing is contributing to the great legacy of Chevrolet. Founded in 1911 in Detroit, Chevrolet is now one of the world's largest car brands, doing business in more than 140 countries and selling more than 4 million cars and trucks a year. Chevrolet touts that it provides customers with fuel-efficient vehicles that feature spirited performance, expressive design, and high quality.

Anonymous wrote on February 13, 2012 - 6:44pm Permalink
I was considering purchasing a sonic ltz but I found out that there is not a automatic trans available with the turbo engine. Any idea when or if the are going to match up the turbo with the auto trans?