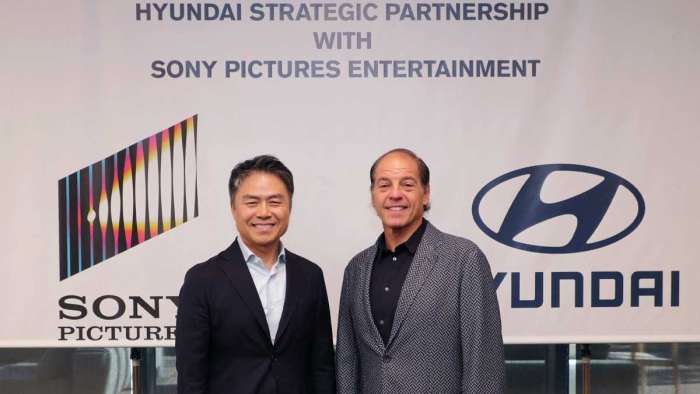 Hyundai Motors forms a strategic partnership with Sony Pictures Entertainment to take its marketing and content creation to the next level.
Advertisement

Hyundai Motors and Sony Pictures Entertainment just announced that it formed a “multi-picture promotional partnership.” This alliance will offer valuable marketing support and aid in the production of supplementary content-creation.

Hyundai has some grand visions for the future of cities, called “Hyundai Motor’s Future Mobility Vision.” Hyundai’s dream entails electric transportation utilizing air travel, which sounds like Sci-Fi. Still, it hopes to use Sony Pictures Entertainment to help convey Hyundai’s dream concept city in movies and other forms of media.

Various concept vehicles will be showcased as well throughout Hyundai Motors and Sony Pictures Entertainment partnership. Hyundai also wants to co-create virtual reality experiences as well as gaming experiences. We can also expect the two companies to co-host events as well.

Most exciting news for most people reading pertains to new Hyundai models, concepts, and tech featured in the latest Sony Pictures movies. There will be five Sony Picture Films where all this will be featured. These films include Uncharted (July 2021), the sequel to Spider-Man™: Far From Home (November 2021), the sequel to Spider-Man: Into the Spider-Verse (October 2022) and more according to the latest Hyundai press release.

There is a concoction of projects in the works for the two companies that are in an alliance, but Hyundai has a specific goal of helping the masses comprehend its grand vision of a future city. Hyundai wants you to understand through Sony’s incredible technology of virtual reality, gaming, and movies where they see and want the world to be in the future.

I am a prehistoric dinosaur; I don’t want a super high-tech future straight out of Sci-Fi. It will inevitably come to a fate like that; however, the most significant advantage I see here for Hyundai is proper marketing, which can take its brand to the next level. The brand deserves to have a change in recognition from the public.

I appreciate Hyundai because of the excellent vehicles continuously produced at a phenomenal price point. These are the practical things that a consumer can take advantage of, but some convincing marketing is required to make people believe in Hyundai in the first place. I firmly believe Hyundai’s allegiance with Sony Pictures Entertainment will lead to great results for both companies.