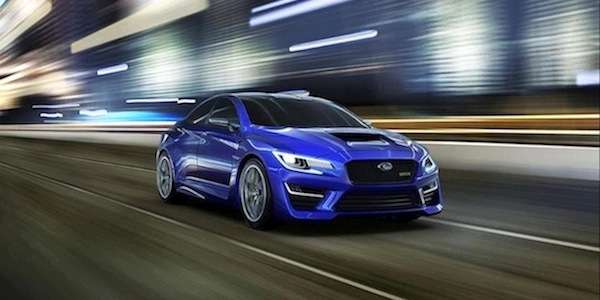 Subaru fans were disappointed that the 2015 WRX and 2015 WRX STI didn’t look more like WRX Concept car, but is the design dead? Subaru announced the 2015 WRX / STI performance car would launch with a new sculptured body and that upset many WRX STI fans. They felt somewhat deceived that it didn’t resemble the WRX Concept car that was unveiled last March at the New York Auto Show. After the big tease on Subaru’s website of what was to come, they expected a car that more closely resembled the WRX Concept car. But the WRX Concept design may still hit showrooms as a WRX / STI model.

In an interview with Motoring.com.au, Subaru WRX Project General Manager, Masuo Takatsu told the Australian automotive site that the WRX Concept design that everyone liked so well could still make production. Takatsu said, “It’s quite possible that the main theme of the concept car will be put into a production car design.”

The Subaru WRX Project General Manager blamed lack of engineering resources for the design of the new-generation 2015 WRX / STI and the reason it didn’t resemble the WRX Concept car. It looks like Subaru is listening to their fans and are considering bringing the design to a production WRX / STI in the future.

Masuo Takatsu also said, that in addition to lack of engineering resources, safety regulations and “other outside forces” kept Subaru from building the 2015 WRX / STI in time for this new model change. Takatsu went on to say, “But once it comes to production, we had to comply with regulations, liveability and practicality, and that’s the reason it deviated so much from the concept car.”

Takatsu also gave some insight into why the 2015 WRX / STI only comes in a sedan body style. He said buyer demand, especially in the critical U.Ss market, meant the four-door sedan was the only body style the company would pursue for the foreseeable future. “We know that the WRX Concept looked good, but the people that are in love with WRXs and STIs also like the fact that the production car is a four-door sedan, and that it’s practical and versatile.”

He also talked about why the 2015 WRX got more of a performance increase and WRX STI stayed with the same engine and horsepower. He indicated that it has to do with numbers of cars sold. Masuo Takatsu said in the interview, “With more purchasers buying a WRX, the changes here, including the increase in performance, were imperative in maintaining sales.”

The new 2015 WRX and WRX STI body style wasn’t what fans expected or wanted from the new-generation sports car. But Subaru is listening to their fans and the WRX Concept design could still be on the drawing board for a future WRX / STI performance sports car.