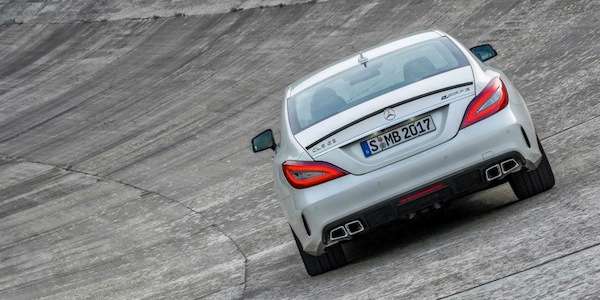 Will these two features help 2015 Mercedes CLS Coupe light it up? [video]

The new revised 2015 Mercedes-Benz CLS Coupe that inspired the 2014 CLA-Class gets two features that will upgrade the stylish four-door coupe.
Advertisement

The newly-revised 2015 Mercedes-Benz CLS Coupe gets two new upgrades that could light it up for the stylish four-door coupe. This is the car that inspired the new four-door coupe design of the popular new 2014 CLA-Class. CLS gets two upgrades that set this car even farther apart from the rest. They will likely filter down to the CLA and other Mercedes models in the future.

Mercedes-Benz upgraded the four-door CLS Coupe with a new honed front section and a new interior. But two other features will upgrade the car even further and set it apart. CLS gets new futuristic MULTIBEAM LED headlights that open up new dimensions in lighting systems. These high-performance, LED lamps could be the best lighting system on the planet.

CLS will be available for the first time with the new MULTIBEAM LED headlamps as designed and developed by Mercedes-Benz. It’s a new evolution in lighting systems for the automobile and Mercedes is leading the way. These headlamps will optimally adjust the light distribution instantly and automatically to virtually any driving situation. Mercedes says the new lighting system will do it without “dazzling other car drivers.”

More visibility in the corners

The new CLS will also be able to see around the curves better. Each CLS MULTIBEAM LED headlamp features a module for the low-beam headlamp, which can be swiveled outwards by up to twelve degrees. The camera-controlled system offers a preview function which already swivels the active light function before the driver has turned the wheels. It provides illumination of the bend early on. The active light function already swivels back to the straight-ahead position before the end of the bend according to the particular situation. This allows the driver to identify dangers earlier when entering and exiting corners. The anticipatory control allows an additional range of between 30 and 60 meters depending on the traffic situation.

The new CLS will also come with a new 9-speed automatic transmission. It’s called the 9G-TRONIC and it’s the world's first 9-speed automatic transmission with hydrodynamic torque converter in the premium segment. It replaces the 7G-TRONIC PLUS that set benchmarks in efficiency and driving dynamics. Mercedes says the new 9G‑TRONIC with nine forward gears, will reduce fuel consumption, “while further enhancing shift comfort and agility.”

Mercedes has not released pricing or availability of the new 2015 CLS Coupe. It looks like the new 2015 Mercedes-Benz CLS Coupe will light it up on the road and the track with these two new technology features.

Other 2015 Mercedes-Benz CLS Coupe stories of interest.
Meet the stunning car that inspired the popular CLA-Class