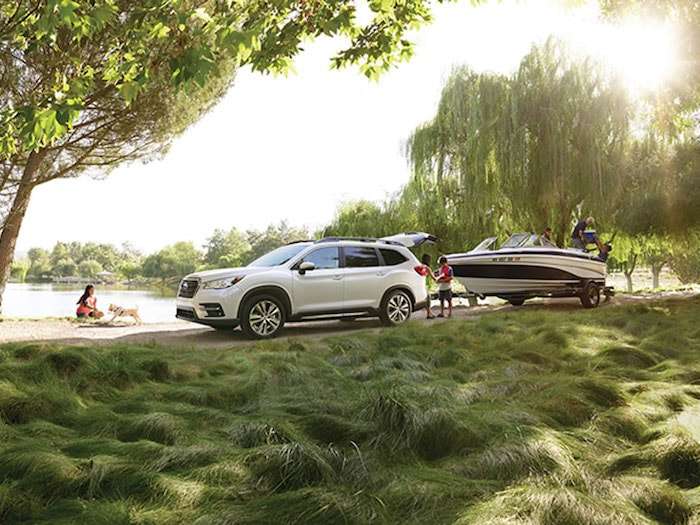 Will the new 2019 Subaru Ascent, the largest vehicle Subaru has ever built, have enough power with a 4-cylinder engine?
Advertisement

The 2019 Subaru Ascent is headed into the extremely crowded and competitive 3-Row segment, where it'll go up against Japanese rivals Toyota Highlander, Nissan Pathfinder, Honda Pilot, Mazda CX-9, and American entries like the Ford Explorer, Chevy Traverse, Dodge Durango and Jeep Grand Cherokee, and upstart contenders like the Volkswagen Atlas.

Most come standard with a V6 engine, while Ford and Mazda also have 4-cylinder turbo engines. What’s interesting, the new Ascent will tow up to 5,000 lb with its new 2.4-liter 4-cylinder engine. How will the new Ascent compete with the competition?

It’s what’s under the hood that will give Ascent an advantage. Subaru engineers developed a new powerplant for the Ascent that has not be used in any other Subaru model. It gets the new FA24 Boxer engine with the latest direct injection and other internal upgrades for the best power and towing vs fuel efficiency.

Most 3-Row SUV/Crossover buyers don’t care about the specs of the new 2.4-liter 4-cylinder Boxer, all they want to know is will it have enough power to haul your family, cargo and a trailer. We'll cover it for our gear-head readers who want to know.

The 2019 Subaru Ascent gets an all-new FA24 2.4-liter boxer engine developed just for the new 3-Row family hauler. It features all-aluminum heads and block, to reduce weight and allows for more rapid warm-up. The internals include heads with dual overhead cams, driven by a timing chain rather than a belt, actuating 16 valves with variable timing.

It has a total engine displacement of 2,387cc with a 94-millimeter bore and an 86-millimeter stroke. The compression ratio is 10.6:1 which keeps cylinder pressures high for efficiency. It also features the newest direct injection technology and a twin-scroll turbocharger.

The most important spec is not the 260-horsepower at 5,600 rpm the new FA24 engine develops, it’s the broad peak torque band of 277 lb-ft between 2,000 and 4,800 rpm that will get gearheads excited and it’s what consumers will feel when they drive the new 3-Row SUV. This is what will get the new 2019 Ascent moving from a start, power it at altitude up steep mountain passes, and it will allow the largest vehicle Subaru has ever built to tow up to 5,000 lb.

The largest vehicle Subaru has ever built doesn’t get a 6-cylinder engine, it gets the new FA24 4-cylinder Boxer engine with enough torque to meet an active families needs. The all-new 3-Row 2019 Subaru Ascent arrives at Subaru showrooms this summer.

Big Engines wrote on February 21, 2018 - 2:24am Permalink
Thanks Mr.Denis for this report, do you have any information about Subaru Ascent use regular fuel or premium fuel? An important question for me :)
George wrote on February 21, 2018 - 3:15pm Permalink
In all the press I've seen the engine specs are based on regular.
Big Engines wrote on February 22, 2018 - 1:10am Permalink
thanks George can you give me the resource
Denis Flierl wrote on February 22, 2018 - 8:00am Permalink
Hi Big Engines. The Ascent 2.4L will run on regular unleaded fuel. Thanks for reading!
Bill wrote on April 15, 2019 - 10:03am Permalink
I own one. The owners book says use 87 or higher. I have been using 93. I get the best mpg with high test. Averaging 30- 35 mpg highway at 50-55 mph. In the hills up and down I get about 21 mpg. Lowest ever was ,19.4
Ed B wrote on February 22, 2018 - 12:00pm Permalink
Yes, I'd like confirmation on the fuel type - what's the secret? They've released pricing and fuel economy figures.
Denis Flierl wrote on February 22, 2018 - 12:11pm Permalink
Ed, from my sources, the new Ascent will run on regular unleaded fuel. Thanks for reading!
Bernie wrote on February 24, 2018 - 8:06pm Permalink
Lame tune for that engine. The 2.0 DIT can be had with a nearly 300 hp and torque factory tune in Japan. They should give it at least 290-300 for mid-range passing power when loaded or towing. I would wait for the second year to see if they see the error of their ways, or see what Cobb and others have to offer. As is, it will have adequate performance for those who do not care about performance.
B eyan wrote on April 24, 2018 - 8:22pm Permalink
What is the turbo specs ? Mfg., life expectancy , water cooled, oil cooled, bearings or bushings, twin turbo or single ?????
Daniel wrote on October 10, 2018 - 12:07am Permalink
We need a V6 Engiene period
Bill wrote on April 15, 2019 - 9:59am Permalink
It may have a 5,000 tow capacity. But looking under the rear where the tow hitch would be? Sheet metal box frame. Not very strong for a hitch mount. Any wrough road towing could over stress the area and create cracks. Subaru needs to beef up that area.k
Brad wrote on March 13, 2020 - 4:49pm Permalink
I have a 2019 Ascent premium. When you install hitch you replace the rear bumper with a heavy duty hitch that becomes integrated with the frame best hitch I have ever had. I live in Colorado and amp at 9000 ft above sea level. I run 85 octane which is all you need at altitude. The 2.4 Turbo w/CVT pulls my 3200 pound trailer 500 pound hitch weight, like a breeze You can tell when the computer has figured out the trailer is in back for trailer tow sway. Pulls steady and I pass cars on some passes. CVT works great with paddle shifters.