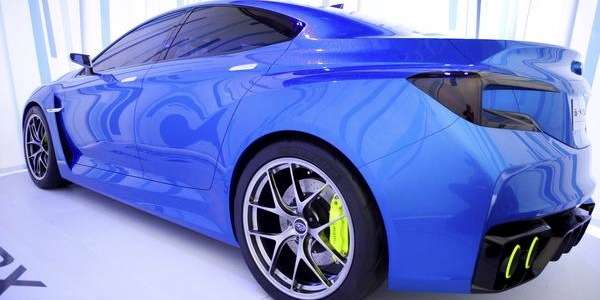 The 2015 Subaru WRX S4 will be revealed on August 25. Will it be coming with hybrid power?
Advertisement

Subaru says the new Japan-only 2015 WRX S4 will feature "superior environmental friendliness." Could this mean that the new WRX S4 that will be revealed on August 25 will have new hybrid power? We reported that Subaru has made a new investment commitment to motorsport and they could be returning to WRC or Le Mans endurance racing next year. Subaru has had a history of testing their performance cars on the world stage of motorsport, and this could be the ideal time to put a new engine in the WRX STI and see how it performs.

Subaru is looking at launching a new line of multi-purpose hybrid models starting in 2018. Subaru has rolled out their “Prominence 2020” vision and it will include a new plug-in hybrid and seven seat SUV. Subaru will also overhaul its existing boxer engine lineup by 2020. Subaru kept the old 2.5-liter Boxer engine in the 2015 WRX STI for the global market, but chances are it will be upgraded with the new 2.0-liter engine. Will it also include hybrid power?

When Subaru announced the launch of a new 2015 WRX S4 sports sedan, they said it will come with a “superior environmental friendliness” and new “smart driving” that could mean it will be coming with new hybrid-power. The new 2015 WRX S4 will initially be a Japan only market model, but it could be the forerunner of new performance technology that will make its way to other global markets.

We have heard that Subaru will introduce a new plug-in hybrid for Subaru’s largest market, the U.S., to meet U.S. zero-emissions regulations taking effect in 2018. The new plug-in hybrid will be based on Toyota's hybrid technology. Toyota owns 16.48 percent of Fuji Heavy Industries Ltd. (FHI) and Subaru will likely tap this technology for their own models. This new hybrid will be launched in one of the brands current cars in their lineup and not in a new model.

The new 2015 WRX STI’s current 2.5-liter powerplant will need to be upgraded in the next few years. Subaru may be launching the 2015 WRX S4 with a new “smarter” engine in Japan first, and then introduce it later to other world markets in the WRX and WRX STI. If Subaru enters the WRC again, it could be the new Subaru WRX STI has a hybrid-power aspect. It’s interesting that Subaru unveiled the new 2015 WRX STI Global Rallycross car back in April, but we haven’t seen it on the track yet. Could they be waiting to launch it next year with a new powerplant?

One week from today, Subaru will reveal the new 2015 WRX S4 for the Japan market that will feature “superior environmental friendliness” and new “smart driving” that could mean it will be coming with new hybrid-power. This engine technology will be featured in more Subaru models beyond the XV Crosstrek. As the Subaru lineup evolves into more hybrid models, Hybrid- prototype racing would be especially attractive to Subaru and Subaru Tecnica International (STI). Stay tuned to Torque News for the latest 2015 Subaru WRX S4 news.

Other 2015 Subaru WRX S4 stories of interest.
This 1 improvement will make WRX S4 the safest performance car on the planet