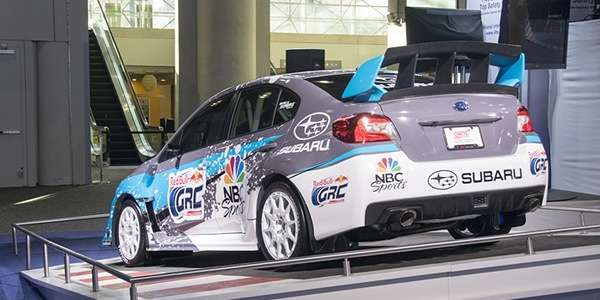 Will Subaru return to WRC with a startling new 2015 WRX STI?

Subaru is preparing to make a new commitment to motorsport. Will it be a return to WRC in the 2015 WRX STI?
Advertisement

Subaru pulled out of the World Rally Championship after the 2008 season, but they could be making a return with the 2015 WRX STI. Auto Express is reporting that Subaru is “prepared to commit investment to a motorsport return.” They are saying that Subaru returning to WRC is one thing that is on the table, but there could be another motorsport option. What else might Subaru be looking at?

Auto Express says that Subaru may also be looking at Le Mans endurance racing. They have seen how Toyota’s LMP1 team has had success, and are also eyeing the return of Nissan to the sport in 2015. The report goes on to say that a Subaru insider tole them “the budget and willpower could be found, if there is a big English audience to recognize the Le Mans commitment.” They are also looking at the separation between Audi’s Le Mans dominance and its road car business as a primary reason they might not make the decision to enter Le Mans endurance racing.

Subaru is looking at launching a new line of multi-purpose hybrid models starting in 2018 and it could be the perfect time to put them on the world stage of motorsport. Subaru just announced the launch of a new 2015 WRX S4 sports sedan that will come with a “superior environmental friendliness” that could be coming with new hybrid-power. The 2015 WRX S4 will be revealed on August 25 in Japan for that market.

If Subaru enters the WRC again, it could be with new Subaru WRX STI that has a hybrid-power aspect. The STI would have to be heavily modified from its current state to comply with the supermini-friendly regulations currently present in the WRC. As the Subaru lineup evolves into more hybrid models, Hybrid- prototype racing would be especially attractive to Subaru and Subaru Tecnica International (STI).

Subaru pulls out of WRC

Subaru pulled out on the WRC in 2008 because the business environment had rapidly deteriorated forcing them to withdraw. Even though they had won three manufacture’s titles and three driver’s championship titles, they wanted to protect their brand and Ikuo Mori, president of Fuji Heavy Industries Ltd. cited the global economic slump and falling car sales as major reasons for the exit. But that has all changed now and Subaru has seen record sales for five straight years with a six in 2014 a strong possibility. The economic climate has changed and it looks like Subaru is ready to launch a new motorsport program.

Keep in mind that non of this has been confirmed by Subaru, but the Japanese automaker will stay committed to their core values of safety, AWD four-wheel performance, and the sporty driving dynamics of their flagship WRX STI. This could be the right timing to launch a new hybrid-powered 2015 WRX STI in the World Rally Championship or Le Mans endurance racing. Stay tuned to Torque News for the latest Subaru motorsport news.