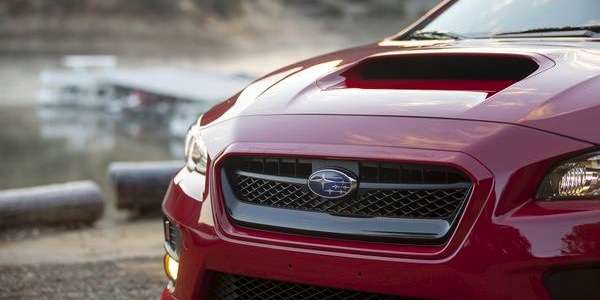 Subaru has introduced the all-new 2015 WRX S4 for the Japanese market. What does the new performance car tell us?
Advertisement

In just a little over a month, Subaru will introduce the all-new 2015 Subaru WRX S4 in Japan. This will be a Japan model for the Japan market only. Subaru is keeping tight lips on this new WRX performance model and we will get to know more on August 25. Subaru has produced a special website for the WRX S4 and we’ve included the link below. Each “S” stands for something different, with the first “S” standing for Safety.

We know about the new-generation EyeSight safety system that Subaru will feature on the 2015 WRX S4 for the first time. It’s only been available on the new 2015 Legacy sedan and 2015 Outback Wagon up until now. This system is one of the best safety systems of any automaker and was rated the highest of any system and excels in crash avoidance. We aren’t sure why Subaru doesn’t include this technology on the U.S. spec 2015 WRX because it would be a big plus.

EyeSight uses two charge-coupled device (CCD) cameras mounted inside the car on the upper edge of the windshield. The EyeSight system processes stereo images to identify the vehicles traveling in front, as well as obstacles, traffic lanes and other items. The video information is relayed to the EyeSight computer, which is also networked with the car's braking system and electronic throttle control.

Will bring S4 to a complete stop

Below speeds of approximately 19 mph, EyeSight is capable of detecting pedestrians in the WRX S4’s path and can activate to mitigate or even avoid the collision. Under certain circumstances, EyeSight is able to bring the car to a complete stop, thus avoiding a collision.

WRX S4 gets best safety system on the planet

Subaru is the global leader in this technology and the proof is in the recent IIHS tests. "Our buyers trust us to provide safety in their vehicles" said Thomas J. Doll, president and COO, Subaru of America, Inc. "With all of our 2013 models listed as IIHS Top Safety Picks and now the 2014 Legacy and Outback models tested to 2013 TSP+ and FCP status, this is further proof that we deliver on that trust."

Want to know more about the new 2015 Subaru WRX S4? A special website was launched on the Subaru official website at 11:00 am on July 25 to release teaser images and other information. Now Subaru needs to offer this superior safety system on the U.S. spec 2015 WRX for North American buyers.

Carl wrote on July 30, 2014 - 2:40pm Permalink
Any word on whether this is Gen 1 Eyesight (like is on the 2014 Outback or the Foresters) or Gen 2 Eyesight (like is going to be available on the new Outback / Legacy)? Because if it's Gen 2, that'll stop the car at with a speed difference of 30 mph or less, not 19. And so far as we've been told / able to determine, none of the systems can reliably detect pedestrians, motorcycles, chain link fences, or light poles. They do a REAL good job with cars or garage doors, though.