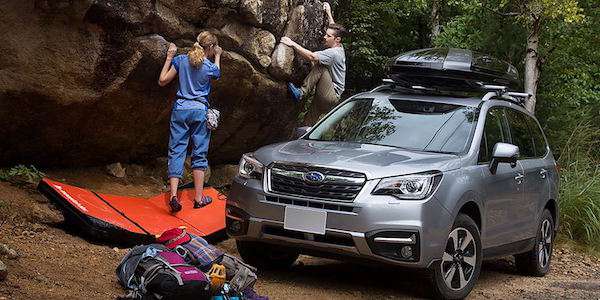 Why is the new 2017 Subaru Forester a big hit with a new generation of adventure seekers?
Advertisement

Subaru’s 2017 Forester is more than just a small SUV, it’s a recreation-purposed vehicle that is tops on adventure seeker’s list. The Subaru Forester isn’t just popular in the U.S., it’s the number one selling vehicle in Subaru’s all-wheel-drive lineup around the globe. A new generation of adventure seekers are finding out about the small SUV.

Forester is a hit around the globe

In the U.S., Forester posted a 3.4 percent sales increase in September. It’s number one in the lineup with 130,652 unites sold YTD. Another recreation-purposed vehicle, the Outback wagon, is closing in on Forester with 126,426 units YTD. It’s been 38 consecutive months of more than 10,000 Foresters sold in the US.

In Canada, it was a record September sales for Forester, Crosstrek,, Outback and WRX STI. The Subaru Forester was the volume leader in September with 1,176 units sold, an increase of 15.6 percent. The Subaru Outback enjoyed its best September on record with results up 4.7 percent and 1,129 units sold.

Why is Forester popular with a new generation?

Subaru is attracting new buyers to the brand at a 60 percent clip. Many are younger buyers looking for a vehicle that will get them away from civilization on the weekends. Subaru has the answer. A new generation of consumers are looking for outdoor adventures and live in mountainous regions of Colorado, Oregon and the Northeast where they will take the vehicle camping, hiking, mountain biking, skiing and mountain climbing. Enter the Subaru Forester.

Forester’s X-Mode is a new feature on the new-generation SUV designed just for this adventurous group. It's designed to be used in extreme off-road use and further enhances the rough road drivability. It will get you places most small SUVs won’t go. The new Forester will run with confidence through some difficult and extreme terrain. As the tires begin to slip on the rocky slopes, X-Mode enables the Forester to climb steep mountain roads with ease. By integrating the engine and transmission control with AWD and VDC, adequate control is maintained to all four wheels and the vehicle achieves a smooth escape.

A new-generation of adventures seekers have responded to the Forester because they want a recreation-purposed vehicle that fits their active lifestyles. The small SUV also offers the latest high-tech safety features compact buyers are looking for. It also offers good fuel mileage and cargo carrying ability. It’s a formula these buyers are responding to. More on Page 2.

Subaru has created a niche within the market with their unique all-wheel-drive Forester SUV. Adventure seekers have responded because they want a recreation-purposed vehicle that will get them away from civilization. The 2017 Subaru Forester is tops around the globe on a new generation of adventure seeker’s lists, because it will.

Peter wrote on October 9, 2016 - 2:01pm Permalink
I'm thinking of getting a used Outback or Forrester
Bill mee wrote on October 10, 2016 - 11:05pm Permalink
How do you know this is a new generation of buyers. Its really only speculation that new younger buyers are stepping up. Everything in your promotional propoganda could be repeated for older buyers getting another subaru or that older volkswagen drivers are coming over. There were no statistics given other than sales increases. But were those sales increases from the lowest month of the year or from the lowest subaru sales numbers ever. Shouldnt we see an article promotion on the disadvantages of the other brands these cars buyers are coming from.... Say challenger buyers. Since we all die and new people turn 16 everyday I guess all brands are benefitting from a new generation of buyers. Hard to trust this type of carefully worded information.