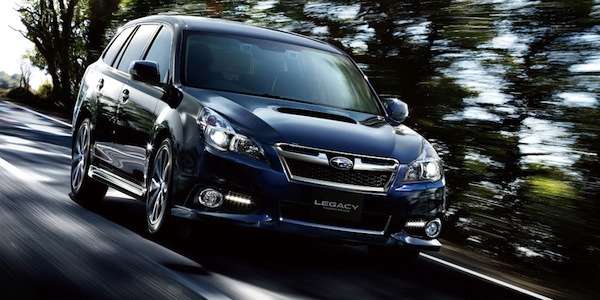 The all-new 2015 Subaru Legacy sedan gets ready to launch here in the U.S., but we won’t see the new 2015 Legacy wagon.
Advertisement

The new-generation Subaru Legacy Touring Wagon will be available in Japan stating in June as the previous generation Legacy ends production on June 30. But don’t expect to see the 2015 Subaru Legacy wagon Touring or Legacy wagon 2.0 GT here in the U.S. It’s a global wagon that will be sold in Japan and European markets, but we won’t see the sports tourer here in North America.

Why won’t Subaru sell the Legacy wagon to U.S. customers? Subaru has built their niche market in the U.S. with multi-use vehicles and the two top sellers are the new-generation Forester SUV and the Outback wagon. The new XV Crosstrek crossover is gaining momentum and is a close third. The new 2015 Legacy sedan should help sales, but a wagon just isn’t going to do well with U.S. buyers.

In Japan and Europe, the sports tourer is a big part of the market, but wagons aren’t popular here. That’s why we won’t see the new LEVORG sports tourer sold in the U.S. either. But the new-generation 2015 Legacy sedan should be able to compete well with the Toyota Camry and Honda Accord.

Legacy is now in its six-generation, and the 25th anniversary of the Legacy sees the flagship make the next step in its evolution. This model shows the design direction of next generation Legacy mid-size sedan models and where Subaru is headed. The Japanese automaker as a brand is growing up too, and Subaru is hoping the new 2015 Legacy will launch the brand forward in the U.S. sedan market.

The big advantage Legacy has over the competition, is that all models come standard with Subaru’s all-wheel-drive. It sets Legacy apart from the other brands who only offer front-wheel-drive. None of the other top sedans in this segment like the Honda Accord LX, Ford Fusion SE, VW Passat SE, Hyundai Sonata SE or Mazda6 Touring offers all-wheel drive. But the 2015 Legacy 2.5i Premium base model does.

This is where Subaru and the new 2015 Legacy sedan excels. It’s always had the Subaru all-wheel-drive system, but it gets refined for the new six-generation Legacy. Both 2015 Legacy models are equipped with a newly refined version of the Active Torque Split version of Symmetrical AWD. But Subaru already offers the new muti-purpose 2015 Outback wagon here the U.S. and a Legacy wagon just wouldn’t sell.

And Subaru will launch the new Legacy sedan with 36 mpg when equipped with the 2.5-liter four cylinder powerplant. This beats all the other top sedans listed above expect for the two-wheel-drive 2014 Mazda6 Touring that gets 38 mpg highway. Subaru is going after the highly competitive sedan segment and knows the wagon won’t sell here in the U.S. So don’t look for a 2015 Subaru Legacy sports tourer anytime soon in North America.