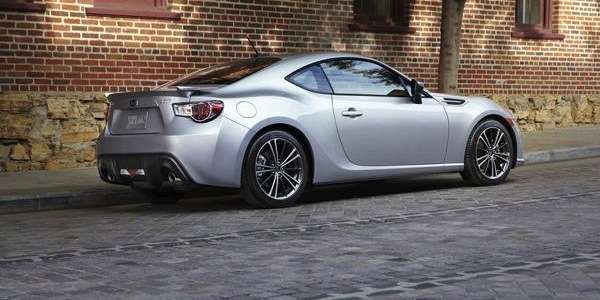 The 2015 Subaru BRZ is set to make its dealer launch this month and the outgoing model’s numbers are up. But why doesn’t Subaru sell more?
Advertisement

Subaru as a brand is still setting records left and right and the BRZ two-door sports coupe is selling too, but not the numbers that Subaru had hoped. Subaru U.S. reported 41,367 vehicle sales for June 2014, a 5 percent increase over June 2013 and the company’s best-ever June sales. The Subaru BRZ is the lowest volume model in the Subaru next to the outgoing Tribeca of course. Why isn’t Subaru selling more of the rear-drive coupes?

Subaru’s year-to-date sales totaled 238,008, a nice 16.3 percent increase over the same period last year. Forester, XV Crosstrek and the new-generation WRX/STI lead the way in the largest percentage of sales increase. BRZ sales are up 5.6 percent from the same period last year, so sales are moving in the right direction. But Subaru only sold 4,295 units in the U.S. in the first 6 months of this year.

BRZ is a great drivers' car

BRZ is a great drivers car which is no surprise because that was Subaru and Toyota’s goal all along. The rear-drive two-door sports coupe offers a great sports car design, low vehicle weight, an ultra-low center of gravity and precision steering and it offers a low starting price.

Will Subaru axe the BRZ?

It’s been reported that Subaru and Toyota will drop the BRZ/GT86/Scion FR-S as Toyota shifts their attention to a new sports coupe by collaborating with BMW. This is all speculation and we don’t know if the Subaru/Toyota partnership will end. With Toyota owning 16.5 percent stake in Subaru, it’s hard to believe they would pull the plug on the BRZ/GT86/FR-S. But with lagging sales, it may make sense.

Subaru has upgraded the 2015 BRZ with improved handling, a revised suspension which translates to a more enjoyable driving experience. And all 2015 BRZs get larger stainless tailpipe tips, simulated carbon-fiber center dash panel, and roof-mounted and body color shark fin antenna. The 2015 BRZ ($25,695 ) Premium 6MT is only $100 more than the outgoing model. So the 2015 BRZ is still a great value for sports enthusiasts.

Subaru even came out with the new 2015 BRZ Series.Blue that features aerodynamic enhancements that will make the two-door coupe slip through the wind easier. It comes with black STI front, side, and side-rear under spoilers, which will keep all four corners of the sports car firmly planted at high speeds. It also comes with a number of special interior upgrades to set it apart.

Does Subaru need to do more?

Will all these changes be enough to excite sports enthusiasts to buy more 2015 Subaru BRZs? We’ll have to wait to find out. We do know that the new-generation 2015 Subaru WRX/STI is selling at a record clip and dealers can’t keep them on the lot. Subaru has sold three times the number of WRX/STI performance cars over the BRZ. Maybe fans want performance over sport and would buy a new BRZ STI with a turbocharged 2.0-liter powerplant with 300 hp?

Subaru has now seen 31 consecutive months of year-over-year growth and is well on its way to its sixth successive annual sales record and is doing a lot right. Can they continue to keep an underperforming BRZ in the lineup? 2015 BRZ models will begin arriving in dealerships this summer and time will tell.

Toby wrote on July 3, 2014 - 8:54am Permalink
The only reason they don't sell more is because it is underpowered.
Patrick Rall wrote on July 3, 2014 - 5:53pm Permalink
I agree. Great car, but its slower than my 5,500lb truck in a straight line. That wont fly in the US.
Soakee wrote on July 3, 2014 - 8:55am Permalink
I thought the article would answer the question of why Subaru doesn't sell more BRZs, but the point of the article was simply to ask the question. I guess the reader is supposed to answer the question/
Mako wrote on July 3, 2014 - 10:47am Permalink
Just waiting for more power. Tempted to get another WRX. Race a Z06 currently
Carl wrote on July 3, 2014 - 10:53am Permalink
Three points to consider. First, Subaru also makes the direct competitor to the BRZ, the FR-S. So with more than 26,000 total cars sold last year - how exactly is that a disappointment? Other than they weren't all BRZ's? Second, if you look at what Toyota actually said, it looks like their issue is with European sales which have been lagging. In the U.S. and Canada, sales are still going fine for what this is - a limited production sports car. It's NOT designed to go and outsell Mustang or Camaro. Third - this is still a tuner's car. It's got more than enough power for the average driver - and it's still relatively inexpensive for someone to tune and put their own turbo in, if they want. (And I'm still amused that the insurance for the BRZ is considerably cheaper than for the FR-S.)
jIMMY jIM wrote on July 3, 2014 - 2:46pm Permalink
agree with Toby, if the car had a better engine it would sell better. People already say the Civic SI is way under powered (very much agreed) so making it rear wheel isn't that much better.
Matt wrote on July 4, 2014 - 10:45am Permalink
Anyone can go fast in a straight line. Once you add some corners, there aren't too many cars that are quicker than the BRZ / FR-S / 86. I hear lots of people moan about the power, but how many of you have actually driven one on a tight mountain road? It's got plenty of poke when you need it.
Mako wrote on July 4, 2014 - 1:33pm Permalink
Because more power takes it to another level. Driving a speed maintenance car well is one thing, having both ups the whole fun factor.
Mike wrote on July 4, 2014 - 1:06pm Permalink
I'd already have one in my garage if it had at least 260 hp. I don't need rocketship acceleration, but I do need a car that can quickly get around minivans and pickup trucks that are camping in the left lane. Why don't they sell more? The BRZ and WRX are comparable in price and for daily driving, the WRX is considerably faster, more practical, an misinformed people think they need AWD instead of buying winter tires.
Ben wrote on July 4, 2014 - 7:52pm Permalink
What both BRZ and FRS need isn't just limited to more power. Subaru and Scion need to get rid of the useless backseat to make room in the boot. Also, the hideous taillights and headlights need to be redesigned to something sleek and stylish.
Greg L wrote on July 7, 2014 - 10:46pm Permalink
I'm a long time Subaru owner, since 1982, and Subaru has always been a unique auto company. That is why I have owned so many 21 to date. But I have to say, the BRZ, unless you have money just sitting around, just doesn't work for most of the northern part of the country. They are not useful in snow or ice, so it's more of a play toy in those regions. I can see if you live in a nice sunny climate, it's a good little sports car. There is limited space for storage, again just a toy. The reason the WRX has out sold the BRZ, up until now, because there was a lot of user friendly space in the hatch, but again Subaru quits making the hatch ?? It has been reported that WRX/STI sales are up since 2015 was released, if that is the case, why are so many sitting on dealers lots, and now the WRX/ STI are special order only ??? Subaru in my opinion has shot itself in the foot, they have stated until now that the engine option will remain the same for the BRZ, good driving car, but needs more power, and the WRX prices have gone up, no more hatch, so again just another toy, limited useable storage space. No longer can a 24-35 year old guy with a couple of kids talk his wife into a WRX, because there is no room for all the kids things, in the sedan !!! So they either go to another brand like FORD Focus ST, or something like that, or if you are a loyal Subaru owner like myself you purchase a Forester XT.