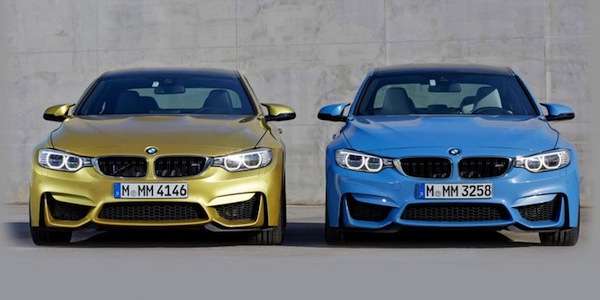 Why 2016 BMW M3/M4 get sweeping prices cuts in Australia

The new 2016 BMW M3 and M4 will get big price cuts in Australia. Why do the performance models get their prices slashed?
Advertisement

When the new M3/M4 arrives in October, they will get more standard equipment for the new model year with revised full-LED headlights and tail-lights, twin-round LED daytime running lights and a light bar connecting the headlights and grille. They will also now come standard with Adaptive LED Headlights, Head-Up Display, Driving Assistant with Lane Change Warning and Approach Control Warning, and Tire Pressure Monitor. A host of new technology ConnectedDrive Services will also come as standard.

Inside BMW M3/M4 will get extra chromed interior highlights, ambient surround illumination of the center stack and full Merino leather trim on the instrument panel, door trims and glovebox.

The 2016 M3/M4 powerplant will remain untouched and comes with a twin-turbo inline six-cylinder, with 317kW and 550Nm. The performance sedan and coupe will launch from 0-100km/h in 4.1 seconds (4.4 for the convertible) and the engine is mated to a seven-speed dual-clutch automatic transmission.

BMW Australia communications manager Lenore Fletcher told CarAdvice that the price cuts and added features are due to “market forces” from the competition. Fletcher says, “You’re correct in saying that there is a price revision here with the M3 and M4, and that’s in response to the market.”

Consumers always win when there is competition in the market and in motorsports. We see BMW slashing prices in Australia to better compete with chief rivals Mercedes and Audi. Unlike the U.S., the 2016 BMW M3 and M4 will be cheaper and get more standard equipment when they arrive in Australia in October.

Henry Ting wrote on July 30, 2015 - 2:03pm Permalink
The real reason of the price cut is the diminishing demand on BMWs. At that price range, quality is what people are looking for and the present era BMWs pale in comparison with the older BMWs in quality. Lousy paint jobs (orange peel), plastic components under the hood such as pulleys, thermostat housing, one-time use aluminium fasteners, no engine oil dipstick, lack of vital instrument gauges such as coolant and oil temperatures,.....as a long-time BMW owner from the 2002 tti, to the E30. to the E46 and the current E90, I noticed on each and every new model, there is a distinct downward level of quality in its cars. People buying into BMW couldn't care less of the price preference, and BMW got it wrong again by lowering its price to compete with others.
Joe Nobody wrote on July 30, 2015 - 7:11pm Permalink
Henry--you're absolutely right. I had an E36M3 and it was the finest piece of machinery I've ever owned. The leather was absolutely amazing and can't be found in BMW's today. It was velvety smooth and the new car smell was so tantalizing. They don't do it like that anymore.