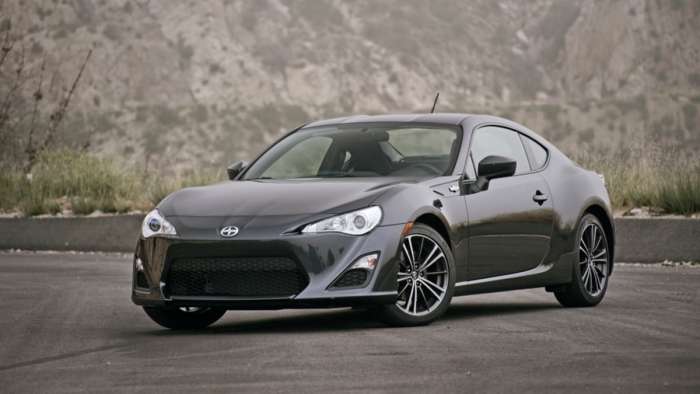 This is no April fools joke, Subaru and Toyota may need to stop a recall for BRZ and Scion FR-S sport coupes. The fix is worse than the original problem.
Advertisement

Subaru and Toyota may have to stop a recall for 2013 Subaru BRZ and 2013 Scion FR-S sport coupes. Reports say Toyota techs don’t know how to work on Subaru engines and some were not fixed properly. The recall is for faulty engine valve springs that may fracture causing an engine malfunction or a possible engine stall. Torque News reported last month, techs may be using too much sealant and it’s causing engines to fail.

Now reports from Automotive News say the National Highway Traffic Safety Administration (NHTSA) is getting involved. The recall also includes 2012-2014 Subaru Impreza, 2012-2013 Impreza wagon, and 2013 XV Crosstrek models that use the same FB20 2.0-liter naturally aspirated Subaru Boxer engine. But there have been no reports there are any issues with these Subaru vehicles so it appears to be primarily a Toyota (Scion FR-S) problem.

The NHTSA is investigating claims that some Scion FR-S and Subaru BRZ repairs being done by dealers are causing the 2.0-liter Boxer engine to stall and engine knocking is also a problem after the recall fix is done. There are no reports yet about Impreza, or Crosstrek having recall fix issues.

Subaru reports only one post-recall fix

It looks like there may be more Toyota (Scion FR-S) issues with the recall than Subaru. A Subaru spokesperson told Automotive News, "All I can do is confirm that we have not seen any cars with engine issues caused by the recall fixes that we have conducted. We only had one person return post-recall fix. We still encourage owners to come in and complete engine repairs."

The NHTSA told Automotive News it believes the engine valve spring repair being done now at dealers across the U.S., is not working and they are likely to get involved. In a recent email to AN, the NHTSA wrote, "The National Highway Traffic Safety Administration has been in communication with the affected automakers regarding the recalls. The agency will continue to monitor all the available data to determine if there are safety implications that merit additional agency action.”

You May Also Like: Buying A Used Toyota 86/Subaru BRZ Will Save You A Boatload Of Money

The Center for Auto Safety has also taken notice of the BRZ/Scion FR-S recall issue and is calling on the NHTSA to get involved asking the Japanese automakers to “cease recall repairs and provide all vehicle owners who have received the repair a loaner until the problem is identified.”

Toyota says they have incorporated “enhancements to the remedy’s technical instructions” to provide additional guidance to the technicians who are making the repairs. They are also saying it’s safe and encouraging owners to bring their Scion FR-S in for the recall. If you have any questions or complaints you can register them with NHTSA here or call their vehicle hotline at 1-888-327-4236.

William Ramsay wrote on October 31, 2019 - 2:58pm Permalink
I don;t want to bring my 13 FR S in for the recall
Nancy Phillips wrote on November 11, 2019 - 11:53pm Permalink
Took Car in for recall, took a week, 2 months later engine knocks now having it towed to Toyota of Temecula. We had no other issues prior to this. A debacle and major inconvenience. Living in California will be calling a Lemon Law attorney.
Scott E Frias wrote on February 13, 2020 - 2:52pm Permalink
2nd Motor just left me on the side of the road. This recall is a nightmare. I would have brought my car to Subaru for the repair. I am pressing the dealership to make me whole again. Also, I did file with NHTSA on this last one because the failure sent plums of gasoline into my engine compartment. Thankfully there was no fire... this time.
William Ramsay wrote on February 14, 2020 - 11:23am Permalink
2nd Engine? They tried twice on your original or installed a new engine? I have 30+ years in the motor trade and have seen recalls go bad but never like this. I asked if Subaru could do but NO. I reluctantly had booked the appointment last year but canceled. If and when a valve spring breaks in my engine I'll hope they figured out what to do.
Anna C wrote on February 27, 2021 - 7:13am Permalink
My Subaru has just suffered a fractured valve spring and they are going to charge me for the repairs. It’s a 2014 model and was not recalled :(
Glecylinda Yabut wrote on April 26, 2021 - 3:22pm Permalink
I have the same case as yours , what happened then ? How much did you spend ? Is it ok now? My 2014 Scion FRS is not in the recall list . It just stopped while I was driving . Toyota said it had motor malfunction and the valve sorings went off . They estimated repair at $11 k with a used engine. Pls let me hear from you . Thanks !! .
Anna C wrote on April 26, 2021 - 5:05pm Permalink
Glecylinder, hi :) My car is still in at Subaru dealership. They have had it since 15 December. They haven’t even really told me what was wrong, just that the valve springs fractured. They were going to charge me for it. I got the media involved and they panicked and said it would be covered. They said it was a simple fix. Yet I am still waiting. Apparently for parts to arrive from Japan. I feel there is something bigger wrong with these engines. I will call them today and see if there’s been any progress.
Naomi wrote on May 13, 2020 - 5:43pm Permalink
I brought my car in for this recall. I haven't had the knocking noise but the issue I am having is that my car has refused to start on more than one occasion. Got the car towed and they tested the battery. alternator and starter, which all came back good. Never had issues until after the recall "fix". Anyone else having this issue?
Laura wrote on July 28, 2020 - 11:06pm Permalink
Took my scion in two months ago and yesterday it left me sit and the engine is making a clunking sounds. At the dealer now, but they are saying they rarely see an engine go in a Toyota with only 50k miles. Tech made it sound like it was my fault and something I did. Waiting to hear back with a decision, did a search and found this information
Anna Christine wrote on February 27, 2021 - 7:15am Permalink
My 2014 brz has suffered a fractured valve spring and was no recalled. Has anyone had any luck getting costs covered by the dealer?