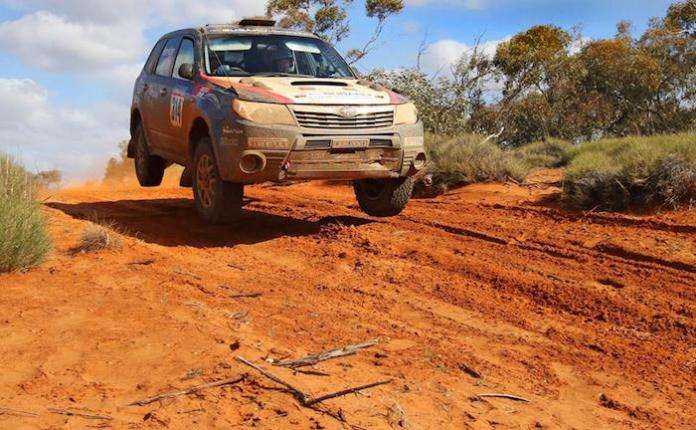 Subaru’s sporty version of their SUV, the Forester XT, took on the grueling Australian terrain and almost won. What does it tell serious off-roaders?
Advertisement

The performance-oriented Subaru Forester XT fended off all competitors to take first place on day one of the Sunraysia Safari Rally in Australia. Keep in mind this is a near-stock version of Subaru’s Forester XT model. The 2.0-liter turbo Forester was lined up against some stiff competition of “Dakar-style” modified trucks and off-road buggies.

The Forester XT was leading the competition for two days and day 3 of the Sunraysia Safari Rally was grueling to say the least. It started with a 113km stage from Pooncarie heading east to the northern edge of Mulurulu Lake. The rally vehicles then took a 130km loop around the lake, followed by a 100km westward stage back to Pooncarie, finishing with the “short” 46km Tarcoola stage on the trip back to Mildura.

The Subaru team of Rob Herridge and Steve Wisby from Maximum Motorsport put in solid results throughout the day, banking strong times against the larger, faster, trucks in conditions that they say “didn’t really suit” the Subaru Forester. Things were looking good as the Maximum Motorsport Forester was in the outright lead, and the team started the final stage with an eight minute lead.

Although they led for the most of the day, Herridge and Hill in the Forester, were left “a little deflated” when the near-production all-wheel-drive vehicle suffered an engine failure just 3kms from the end of the final stage. The 2.0-liter turbo boxer engine in this small SUV had already completed two Australasian Safaris without a rebuild. Rob commented, “It’s disappointing to have to retire with an eight minute lead. But considering we were matching times with Purshouse, Olholm and Riley, it’s really impressive.”

The grueling Sunraysia Safari Rally was a new test for the team and for the Forester. They wanted to see if the SUV could be competitive against the “Dakar-style” trucks and buggies. Rob says, “I’ve been hugely impressed by the Forester. We highlighted just how competitive the near-standard SUV can be.”

The Forester has been a fan favorite of off-road enthusiasts for decades. Subaru’s sporty version of their SUV, the Forester XT, took on the grueling Australian terrain and almost won. It shows serious off-roaders how rugged the small SUV really is in the most grueling terrain on the planet.

LG's New EV Battery Plant Is a Welcome News for Tesla
Tesla Giga Berlin's New Hurdle: It's Not Only the Gov't, but Now Tesla Itself
END_OF_DOCUMENT_TOKEN_TO_BE_REPLACED