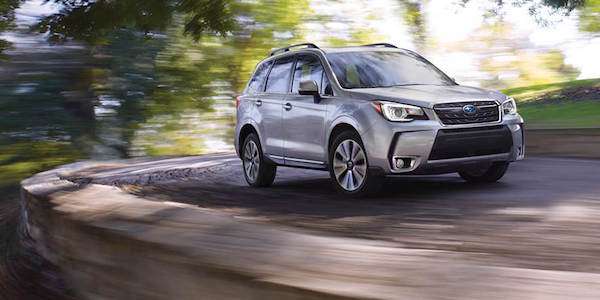 The Subaru WRX 2.0-liter boxer engine gets 18 more horses than Forester and uses hotter camshafts, higher-rate valve springs and other enhancements. But the Forester’s mill is plenty potent and offers up extra power in the small SUV. It comes mated to a Lineartronic CVT automatic transmission and uses manual-mode steering wheel paddle shifters.

The Forester XT also gets a sport-tuned suspension that helps grip the road along with all-wheel-drive with X-MODE. Other extras include 18-inch alloy wheels, a sportier front facia, dual stainless steel exhaust tips and a rear roof spoiler. But it’s the engine that sets the Forester 2.0XT apart the most.

Why is this engine superior?

The Forester’s 2.0-liter turbo boxer engine uses a “square” architecture with identical 86-mm bore and stroke, and all of its reciprocating internals were designed to be as light as possible. It uses direct-injection, an intercooled twin-scroll turbocharger, dual-overhead (outboard) camshafts, dual variable-valve timing (VVT), which Subaru calls “Dual Active Valve Control System (D-AVCS), and a high 10.6:1 compression ratio.

Because the FA-Series engine is used is Subaru’s motorsports applications, engineers had to provide sufficient lubrication to both cylinder banks during the sustained high-lateral-load cornering encountered in circuit racing and rallying. G-forces tend to push oil to the cylinders on the outside of the corner while potentially starving the inside cylinders. To keep oil circulating properly under such conditions, Subaru developed special guides that help the camshaft chain carry oil from the outside cylinders back to the sump.

The 2017 Subaru Forester 2.0XT gets a rally-bred engine and unique suspension tuning to make it one of the sportiest small SUVs available. Its 2.0-liter turbo boxer engine wins Wards 10 Best Engines Award for the second straight year. Its performance and efficiency makes it superior.