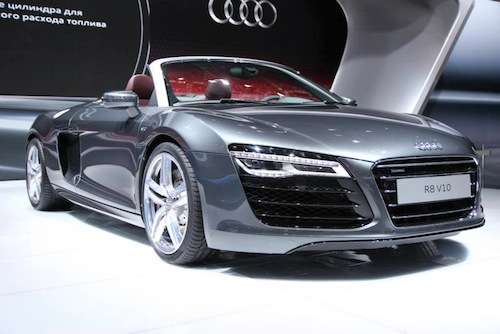 The all-new 2013 Audi R8 V10 has just broken cover at the Moscow Auto Show and we have an exclusive video showing what it took to make the supercar.
Advertisement

The newly refreshed 2013 Audi R8 V10 that just broke cover at the Moscow Motor Show, is one of those special cars that gets your blood pumping. For those who have actually driven one, there aren’t many cars like it on the planet. The Audi R8 V10 has had some changes made to it for the 2013 model year, and the German automaker has done plenty of testing on the mid-engine sports car before it ever made it to production.

Stephan Reil, Head of development Quattro GmbH, says that the new 2013 R8 V10 didn’t need many changes to improve the already fast supercar. “It doesn’t need changes, it needs to be optimized.” So how did Audi improve the 2013 Audi R8 V10? They started by tweaking the transmission. Audi engineers developed a completely new double clutch transmission that transfers power to all four wheels of the mid-engine sports car.

Audi has always been the leader when it comes to double clutch technology. The latest installment of Audi's double clutch is capable of routing 405 ft. lbs. of torque to all four wheels without breaking. It can also handle engine speeds of up to 9,000 rpm's. Audi’s S tronic uses a two clutch system to decrease shift times and increase economy and performance in the R8.

The new transmission helps the 2013 R8 V10 pull off blistering 0-62 times in 3.6 seconds with a top speed of 197 mph. Under the hood of the R8 V10, power has been increased from 525 horsepower to 550 horsepower. Torque is up 8 lb-ft to 398. Audi uses 19-inch wheels covering ceramic disc brakes on the supercar to keep all that power planted to the ground.

The body of the 2013 R8 V10 uses an aluminum Audi Space Frame (ASF) which weights in at just 463 pounds. The mid-engine sports car also uses extensive use of carbon fiber on the body. And the carbon fiber continues out back with a standard carbon fiber reinforced plastic diffusor with integrated black exhaust outlets.

Stefan Reich, R8 Productions Operations management Audi AG, says the R8 goes through extensive testing before the car ever makes it to production. They put the supercar through 4,970 miles of grueling testing on the Nurburgring before the first customer ever takes delivery. The last step involves real world driving on the famed Autobahn in Germany.

The extensively tested 2013 Audi R8 V10 will be seen in showrooms in Europe later this year.

Watch this exclusive video showing you exactly what it takes to become the new 2013 R8.

John Goreham wrote on August 31, 2012 - 8:23pm Permalink
The Spyder version is quite possibly the perfect GT car.
Denis Flierl wrote on September 1, 2012 - 11:23am Permalink
I have to agree John. I have driven the Spyder at High Plains Raceway and it's one of the finest sports cars I have ever driven on the road or track.