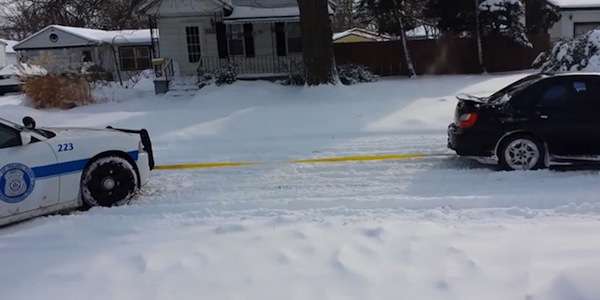 Watch this must-see video as a Subaru WRX “bugeye” pulls out a Dodge Charger police car stuck in the snow.
Advertisement

It would be embarrassing if you were a police cruiser and had to be pulled out of the snow by a Subaru WRX performance car. This is a car this Dodge Charger police car is usually chasing on the highway. But the tables are turned and this Hazel Park, Michigan Police Officer has to eat a little crow as he needs the assistance of the Subaru WRX “bugeye” to get out of a jam in the deep snow. The Dodge Charger of course is rear-wheel-drive while the performance WRX has Subaru’s Symmetrical all-wheel drive system.

This Subaru WRX wasn’t even equipped with winter tires, it had some “not so good” all season tires but still managed to free the much bigger Dodge Charger police cruiser. It had to be a bit humiliating for the cop having to be be pulled out by the WRX. It took a couple tries for the WRX, but after one good tug on the tow rope, he freed the cops car from the snowy corner.

That’s where the Subaru WRX shines compared to other performance cars. The performance WRX features Subaru’s Symmetrical all-wheel drive system that is made for these conditions. Subaru perfected the all-wheel-drive system on the WRX on the Rally courses where they have successfully won numerous championships around the world. David Higgins just won the Sno* Drift Rally 2014 driving the 2014 Subaru WRX STI Rally car last month. Conditions at the race were extremely snowy and icy.

The all-new 2015 Subaru WRX and WRX STI have been unveiled and they both come with a newer version of Symmetrical AWD. In fact, WRX comes with two versions depending on the transmission. 2015 WRX when equipped with the 6-speed manual transmission, uses the brand’s Continuous AWD version of Symmetrical All-Wheel Drive. A viscous coupling locking center differential nominally distributes torque 50:50 front to rear, and Vehicle Dynamics Control (VDC) provides stability and traction control. Should slippage occur, this system transfers more power to the wheels with the best traction.

WRX when equipped with the new Sport Lineartronic is teamed exclusively with the Variable Torque Distribution (VTD) version of Symmetrical All-Wheel Drive. A planetary gear-type center differential and an electronically controlled hydraulic transfer clutch control torque distribution between the front and rear wheels. Under most conditions, VTD splits the torque 45:55, with the rearward torque bias contributing to handling agility. The VTD system continually optimizes torque distribution in response to driving conditions and input from steering wheel angle, yaw and lateral g-force sensors.

The Hazel Park, Michigan Police Officer driving the Dodge Charger was pulled out by an earlier model WRX “bugeye” that still features an excellent all-wheel-drive system that was perfected in Subaru’s Rally cars. Watch the video below as the Subaru WRX with a four cylinder Boxer engine pulls out the rear-drive V8 Dodge Charger.

Hopefully this Hazel Park, Michigan cop will remember this kind act and give the WRX a "break" sometime in the future.