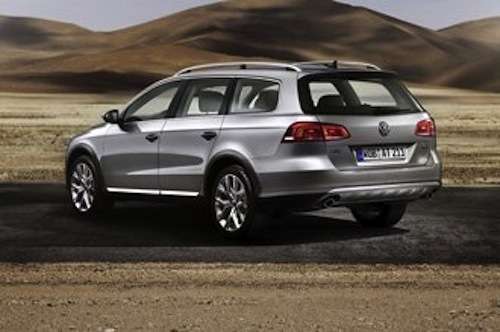 Volkswagen appears to be getting ready to introduce a Jetta Alltrack for the North American market.
Advertisement

In a report by Auto Car, it appears that Volkswagen is planning on introducing a new Jetta Alltrack crossover in North America, and a Volkswagen Golf variant for the European market. This new crossover will be similar to the Passat Alltrack featured in the photo that made its debut in New York earlier this year. According to the report, the new Jetta Alltrack would be available in North American showrooms in 2015.

Features on both models will include a raised ride height, wheel fender trim, distinctive front and rear bumper styling and extra black plastic wheel arch cladding. The cars will also feature one of a kind interior trims, have unique light graphics added and other extras to differentiate the new model.

Why is Volkswagen introducing a new wagon?

Volkswagens goal for the new Jetta Alltrack is to create a more rugged variant than its more economical counterpart. The Jetta Alltrack will not only be rugged in appearance but performance also. The new Volkswagen crossover will give the German company a larger platform option for the already popular Jetta.

Subaru has long been the dominant player in the off-road wagon market, and with Volkswagen wanting to be the number one carmaker in the world, they will need to challenge the Japanese stranglehold in this area. Subaru has long dominated the all-wheel-drive crossover wagon market with the Outback and the Forester. The new more aggressive VW Alltrack could give Subaru some serious competition.

While we don’t know for sure what engine options the new crossovers from Volkswagen will have, we can be sure the models will be front-wheel-drive and have the 4Motion four wheel drive option available to compete with Subaru. There is a possibility the Jetta Alltrack could see a TDI in this platform also. The European version of the Passat Alltrack is using a 2.0-liter TDI four cylinder that develops 140 horsepower. The TDI is mated to a 6-speed dual clutch DSG automatic transmission and all-wheel-drive with an "offroad" setting.

Volkswagen needs to keep development, engineering and production costs as low as possible, so the Golf Alltrack and Jetta Alltrack will likely share many of the same mechanical and engine options. It is reported that both Alltrack versions will be based on a new modular MQB platform.

Volkswagen unveiled the Passat Alltrack at the 2012 New York Auto Show to gauge consumer interest, and it appears the new crossover was well received. Volkswagen is viewing the Jetta Alltrack as the perfect model to slot below the next-generation Tiguan that will be larger and will offer optional third-row seating in 2014.

North American will be a key market for the Alltrack and an all-wheel drive rugged Jetta could be just the answer.

Ty wrote on June 20, 2012 - 9:31am Permalink
Anything farther out than next year is fantasy. Vaporware. Pick a description. Such anouncements as this are in fact, meaningless. What is the point? Will someone wait to purchase a car for 3-5 years? No. So what is the point of the announcement? I think it is fact counterproductive. All they are doing is trumpeting to their competitors what there intentions are. If in fact those are their intentions. Or is is just a ploy to try and weaken their competitors by tricking them into spending resources to 'keep up with the joneses'? But that would tactic is sure to backfire, as if in fact one of their competitors DO start to produce a competeing product. Then This company would be compeled to produce what was just and idea. Then VW would be the one scrambling to keep up. No. Any product announcement farther out than 1 year, (better 6 months), is not targeted toward potential customers.
Anonymous wrote on September 18, 2012 - 9:15pm Permalink
This potential buyer is very happy to have an idea of what may be coming down the line. The Passet Alltrack currently available inEuro would make me very happy! TDI, manual tranny, AWD (more for towing than off road), station wagon, gotta love it.
sittinghereinlimbo wrote on March 9, 2014 - 2:39pm Permalink
Newsflash VW et al - American consumer here anxiously awaiting a 4 cylinder turbo diesel all-track. GLK gets my $ soon if you don't step up...!
Robert F. Hurm wrote on May 28, 2014 - 10:05pm Permalink
I'm looking forward to the Alltrack tdi wagon. I think VW will be surprised how well this vehicle sells in the USA.
Ted Bourne wrote on June 16, 2014 - 12:13am Permalink
My dream car would be a Jetta Sportwagon/Variant with TDI!! Subaru would have some serious competition if they keep the price reasonable