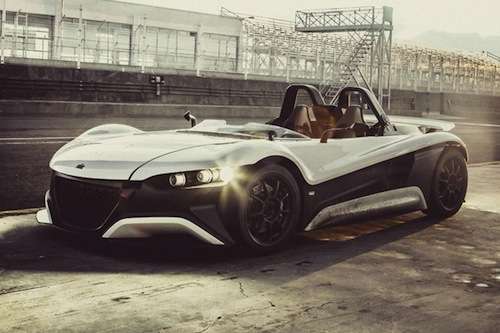 The VUHL 05 lightweight and innovative two-seat mid-engine supercar has been announced. It will be Ford EcoBoost powered and built for performance enthusiasts.
Advertisement

The new VUHL 05 has been held in extreme secrecy but has been officially unveiled for the world to see. It was revealed in London two days ago for a select audience including SIr Stirling Moss at London’s Royal Automobile Club. VUHL
(pronounced ‘vool’) stands for Vehicles of Ultra High-performance and Lightweight). The two-seat mid-engine supercar is the brainchild of brothers Iker and Guillermo Echeverria, whose Mexican/American design company built the breath-taking 05.

The road-legal car recently landed in the UK from Mexico last week where the final assembly took place in Mexico City. The two brothers who designed the supercar have a passion for performance cars that stem from GT and formula racing cars successfully built and campaigned over a 30-year period by their father, Guillermo Echeverria senior.

The VUHL 05 supercar embodies the ultimate in automotive technology from around the world and has the backing of a number of blue-chip companies that includes Ford, Multimatic, Michelin and the Mexican Government. The road-legal sports car has been precision engineered for the track and endowed with exhilarating performance for both the road and the circuit.

The VUHL 05 is ultra-lightweight and weighs in at just 695kg. The chassis is made exclusively of aluminum and the body consists of RTM reinforced plastic and carbon fiber is an option. The suspension consists of unequal length double wishbones front and rear. It will ride on OZ alloy wheels wrapped with 205/45 x 17 front; 235/45 x 18 rear Michelin performance tires.

The VUHL 05 will be powered by a 2.0-liter Ford EcoBoost turbocharged engine which pumps out 285 horsepower and close to 310 lb ft of torque. The lightweight supercar will have a power to weight ratio of 400 bhp per ton. Just how fast will this make the new two-seat sports car? This will translate to a 0-100 k/ph sprint time of just 3.7 seconds and a top speed of 152 mph.

The bodies of the new mid-engined supercar are being fabricated in Canada, with chassis production and final assembly conducted by the advanced manufacturing concern, Adman Leku in Mexico City.

The 05’s handling has been fine-tuned in the UK, while further testing and development is scheduled to take place with assistance from Michelin later this year, both here in the U.S. and Europe. And there is good news for those of us in the U.S. Initial sales will be available in North America and the UK with expansion to other European countries, China and the Middle-East.

How much will the new VUHL 05 cost? Orders are being taken now for delivery beginning in the spring of 2014. The base price will start from 55,000 British Pounds ($81,994 USD) with a wide range of performance options available to allow the 05 to be upgraded to personal taste. For more information go to www.VUHL05.com