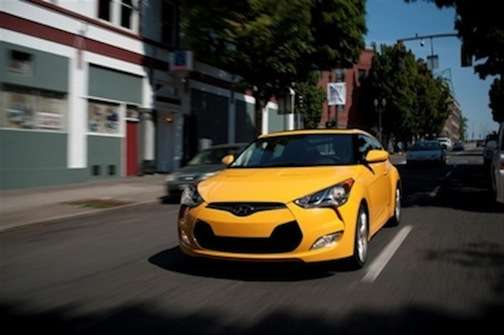 Two reasons why 2013 Hyundai Veloster is the king of "cool"

The 2013 Hyundai Veloster is the coolest car on the planet under 18K. There are two factors KBB used to determine the new Veloster’s “cool factor.”
Advertisement

Some cars are just “cooler” than others and the 2013 Hyundai Veloster and Veloster Turbo have a cool factor that can’t be beat. When people see the Veloster for the first time, it turns heads and gets them talking. Hyundai is producing fun cars and the new Veloster is certainly the kind of car that is a bit unconventional in it’s styling. But that’s not the only reason KBB found the three-door car to be the “coolest car under 18K.

Kelley Blue Book’s KBB.com gave the 2013 Hyundai Veloster the top spot on the 10 Coolest New Cars Under $18,000 for 2013. The editors praised the three door coupe for its highly unique exterior design and stylish, tech-laden interior. “The driver’s side has one door and the other side has two, but unusual asymmetry isn’t the most outrageous aspect of Veloster’s design,” said Jack R. Nerad, executive editorial director and executive market analyst, Kelley Blue Book’s KBB.com. “Inside that unique outside is enough style and tech to earn the Veloster the top spot on this year’s list of 10 Coolest Cars Under $18,000.”

To attract a new generation of buyers, automakers must deliver something unique. And Hyundai has done that with the new Veloster. KBB used two criteria to determine each vehicle’s “cool factor.” They had to be fun-to-drive and fun-to-own. In the 18K or less category, the 2013 Veloster took the top spot. That’s exactly what Hyundai Motor Group had in mind when they designed the Veloster in 2012 and they delivered in a big way.

The South Korean is one of the most progressive automakers in the world and they have a plan to overtake the Japanese. “With the Veloster, Hyundai proves that sleek design and reasonable pricing can go hand in hand,” said Scott Margason, director, Product Planning, Hyundai Motor America. “With its unique third door and advanced technology features, Veloster was definitely created with the cool factor in mind.”

Younger buyers are also looking for performance, and Hyundau unveiled the new all-new turbo model that is sporty and fast. The Veloster Turbo features a new 1.6-liter, 201 horsepower, direct-injected twin-scroll turbocharged engine, aggressive bodykit and unique 18-inch alloy wheels that set it a apart. The Veloster Turbo is selling well and Hyundai keeps connected with younger buyers with a series of Re:Mix Lab events they rolled out across the nation. Hyundai Re:Mix Lab is an event series all about culture, music, art, technology, and of course, the Hyundai Veloster, Genesis Coupe and Elantra Coupe.

Hyundai has come a long way

Hyundai has certainly come a long way from where they started with the poor quality and unreliable Hyundai Excel in 1986. The 2013 Hyundai Veloster and Veloster Turbo are not only the coolest cars under 18K on the planet, but they are now tops in customer satisfaction.