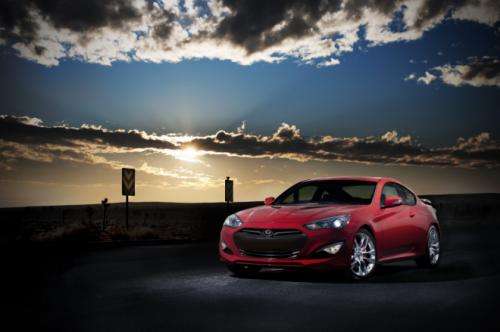 Hyundai tops in owner satisfaction with 2013 Genesis and Veloster

The new 2013 Hyundai Genesis Coupe and 2013 Veloster shows that Hyundai has “come a long way baby.” What do they tell us about the Korean brand?
Advertisement

Hyundai Motor Group has come a long way since 1986 when they sold their first car here in the U.S. The Hyundai Excel did anything but excel as it became known quickly for its poor quality and unreliability. The South Korean automaker became the butt of jokes and Hyundai stood for “Hope you understand nothing’s driveable and inexpensive.” But my how things have changed in less than three decades as the 2013 Hyundai Genesis Coupe and 2013 Veloster are now the top performing vehicles in the AutoPacific Vehicle Satisfaction Awards.

These awards are not given out for reliability or quality, but are taken directly from new vehicle satisfaction customer surveys that identify the top vehicles each year. AutoPacific looks at how satisfied owners are with their vehicle which is much different than other automotive awards. AutoPacific VSAs are the industry benchmark for objectively measuring how satisfied an owner is with their new vehicle. 52,000 new vehicle owners rate 51 attributes for importance in the purchase decision and satisfaction after purchase. They rate everything from interior comfort to performance and fuel-economy.

These awards show where the brand is headed

Two Hyundai vehicles scored highest in their categories and shows where the South Korean brand is headed. The 2013 Hyundai Genesis Coupe and 2013 Veloster topped the Aspirational Luxury Car and Sporty Car categories respectively in the 2013 AutoPacific Vehicle Satisfaction Awards for 2013. “Winning AutoPacific’s Vehicle Satisfaction Award confirms that the Hyundai Genesis has joined the big leagues,” said George Peterson, President, AutoPacific. “Out-pointing all other Aspirational Luxury Cars, Genesis has won this award four out of the last five years. This proves that Genesis is a smart buy for drivers wanting an excellent car at an excellent value.”

Hyundai vehicles represent what buyers are looking for with the latest innovation “representing the ultimate in style, design and performance” by Hyundai. Buyers are looking for individual creativity, passion and connectivity and Hyundai is delivering with custom audio, distinctive materials and bespoke components throughout. The new VSA awards from AutoPacific show that the brand is moving in a direction that will propel the automaker to success. Both Hyundai vehicles are sporty and are appealing to a new generation of buyers.

Genesis stacks up well against the competition

The 2013 Hyundai Genesis did extremely well against the new Chevy Camaro, Dodge Challenger, Ford Mustang and Infiniti G37 in a recent track test. Customers are very satisfied with its performance and driving dynamics which makes it a good choice in the sports car segment. The Genesis is powered by a 2.0-liter engine with Dual Continuously Variable Valve Timing (D-CWT), dual asymmetrical chrome exhaust tips, LED tail lights and a leather-wrapped steering wheel with integrated audio controls.

Veloster appeals to a new generation

The 2013 Hyundai Veloster is selling well and Hyundai knows how to keep the car connected to its buyers. They have recently rolled out a series of Hyundai Re:Mix Lab events from New York City to Los Angeles to keep a demographic who will be buying their cars, connected and interested in the Hyundai 2.0 Veloster Turbo, Genesis Coupe and Elantra Coupe. Hyundai Re:Mix Lab is an event series all about culture, music, art, technology, and of course, Hyundai cars.

The 2013 Veloster features a three door design along with an all-new turbo model, with a new 1.6-liter, 201 horsepower, direct-injected twin-scroll turbocharged engine, aggressive bodykit and unique 18-inch alloy wheels. “The Hyundai Veloster is a sporty car with extremely aggressive styling that resonates with its buyers,” continued Peterson. “With an attractive price point and head-turning styling, Veloster tops the AutoPacific satisfaction ratings with its owners giving very positive reviews.”

The two Hyundai AutoPacific awards are an indicator of where the South Korean Brand is headed. And it’s a far cry from where they started in 1986 with the Excel. The 2013 Hyundai Genesis and 2013 Veloster are two good examples of how an automaker can regain the confidence of consumers and the future is bright for Hyundai.