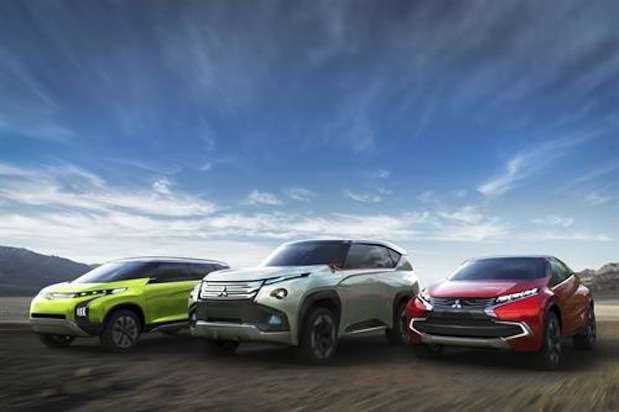 Mitsubishi announces three concept SUV world premieres for the 43rd Tokyo Motor Show 2013 on November 20. The brand could be getting ready to explode.
Advertisement

It looks like the future of Mitsubishi is going to be filled with some exciting new SUVs and a new design language for the brand. Mitsubishi may be getting ready to explode around the globe. The Japanese automaker just announced they will be bring three new SUV concepts to the Tokyo Motor Show 2013 later this month. And it looks like the three new SUVs that will make their global debut’s will make it to production in the near future.

That’s good news for the Japanese automaker who has struggled in the past. But it looks like they are emerging into a new design philosophy and will show up in a big way in three new SUVs coming our way. What does Mitsubishi Motors have planned? They are showcasing their new @earth Technology and it points to the new direction at Mitsubishi and what their manufacturing will take in the near future.

The first two concepts feature PHEV systems that will be market and segment specific tailored to a new generation. The third new concept is an MPV (Multi Purpose Vehicle) that is bigger and more functional. We can expect all three concepts to feature Mitsubishi’s latest "e-Assist"* active safety technologies and the advanced "connected car" technology. This next-generation information system will detect vehicle vitals and can activate a failure/malfunction early-detection system which urges the driver to seek repairs or other maintenance before major issues arise.

The first concept that will premiere in Tokyo will be the Mitsubishi Concept GC-PHEV. It’s a next-generation full-size SUV with “all-terrain” full-time 4WD capability. Mitsubishi says it’s will have a front engine, rear-wheel drive layout plug-in hybrid EV (PHEV) system. It will be powered by a 3.0-liter V6 supercharged MIVEC engine mated to an eight-speed automatic transmission. It will be coupled with a high-output motor and a high-capacity battery.

The second world premiere will be called Concept XR-PHEV which is a next-generation compact SUV. It will use a front engine, front-wheel drive layout PHEV system that is powered by a smaller 1.1-liter direct-injection turbocharged MIVEC engine and a lightweight, compact and high-efficiency motor with a high-capacity battery.

Mitsubishi Motors could be on the verge of an explosion in the next few years as they develop a new design philosophy and technologies that will propel them and their customers into the future. Stay tuned to Torque News for the latest news coming out of the Tokyo Motor Show 2013 starting November 20.