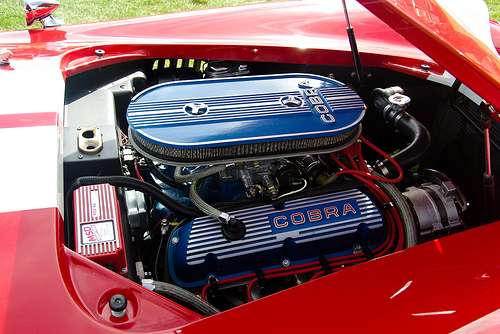 On Wednesday, May 30, thousands of Shelby engines around the world roared in unison in tribute to their maker Carroll Shelby.
Advertisement

In a fitting tribute, on May 30 at 6:55 p.m. PST, thousands of Shelby engines were started and revved in unison to pay tribute to Carroll Shelby who passed away recently at the age of 89. The loud event was organized by the Peterson Automotive Museum in Los Angeles. Over 1,200 people were present at the museum which was used as ground zero for the worldwide tribute to Carroll Shelby.

Around the globe, there were several thousand Ford Shelby Mustangs, Cobras, GT40s and even some Series 1s that all roared at the exact same time. A Shelby Mustang owner who was at the Los Angeles event said, “I've got friends in South Africa who are firing theirs up right now,” There was a sea of Shelby cars lined up at the Petersen Automotive Museum, and at exactly 6:55 p.m., the engines came to life.

And all over the world there were many other gatherings where throngs of idling Shelby automobiles, Mustangs, Cobras, GT500s and others waited for the clock to strike 6:55. It must have been an incredible moment when all those engines were revved at the same time. After the engine roaring tribute was over, everyone at the Los Angeles event gathered for an evening of remembrance.

The evening was called "Carroll Shelby A Life Remembered," and was hosted by Jay Leno and attended by a number of the automotive world's most revered members, including Parnelli Jones, Phil Remington, Don Prudhomme, Linda Vaughn, Ed Pink, Edsel Ford II and Dan Gurney. There were also many other celebrities and friends of the fallen hero.

Autoweek was in attendance and recorded some of the tributes and anecdotes from some of the speakers. “People ask me why I don't have any Ferraris,” Leno said. “Well, in all the pictures of him I never saw Enzo Ferrari smiling, and I never saw Carroll Shelby when he wasn't smiling.”

Edsel Ford II relayed a story about Shelby, whom he'd first met as a young man at Le Mans. He said that Shelby spent five hours driving the GT500 at Ford's Arizona proving grounds during the car's development and was “smiling the whole time. I've lost a dear friend,” he said.

A line by Dan Gurney brought roars of laughter from the 1,200 in attendance. “People say when they made Carroll Shelby they broke the mold,” Gurney said. “And if they ever tried to make the mold again, he'd sue them.” And there were others who touched on Shelby’s propensity for litigation.

The evening called "Carroll Shelby A Life Remembered," and the worldwide tribute with the Shelby engines, was a fitting way to remember the automotive legend.

Toyota's First EV Will Have a Name of BZ: Toyota BZ
First Videos From Inside The Boring Company's Las Vegas Loop
END_OF_DOCUMENT_TOKEN_TO_BE_REPLACED