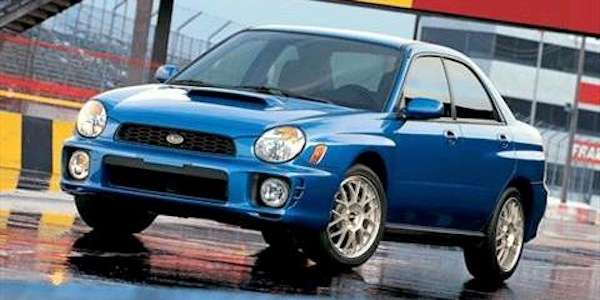 This 2003 Subaru WRX “bugeye” owner is having a hard time letting go of his beloved car. His wife wants a minivan.
Advertisement

This 2003 Subaru WRX “bugeye” owner loves his beloved performance car so much, he just can’t let it go no matter how much his wife wants a new minivan. Imagine being the original owner of a 2003 Subaru WRX, with just 85,000 miles on it, you’ve taken immaculate care of your baby, and your wife says it’s time to sell it. Any guy would be devastated at the prospect of having to sell his beloved WRX.

The guy’s wife is pregnant with their first child and he promises her he will sell it so they can buy a new minivan for their new family. So he puts the car up for sale on Craigslist with a “good faith effort” to show his wife he is trying to sell it. But he puts a price of $23,599 on the car and a description that will keep it sitting in the driveway. This guy has a plan to keep his car, and it will probably work, as long as his wife doesn’t figure out his well-planned scheme.

The pictures of the car are poor at best, and are from a far-away distance so that potential buyers can’t even see the car. He obviously has taken excellent care of the WRX, but describes it as if it’s been abused, driven hard and has mostly city miles on it. He says he’s had “regular” maintenance performed by some quick lube place and has put used parts on it. It’s a brilliant ad and should keep the car sitting in his driveway.

Take a look at the unedited ad he put on Craigslist.

2003- Subaru Impreza WRX - $23,599
Full disclosure: I always promised my wife that when we were "with
child," I would put my beloved 2003 WRX up for sale so we could buy
some minivan/SUV atrocity with a big enough rear window to put those
infuriating family stickers on. So this ad is a good faith effort.
For sale: the last vestige of my youth.

Mileage: 85,000. Almost all city miles. I'm everything that is bad
about a WRX owner, so rest assured that most of those 85k miles were
spent at full throttle, rapidly accelerating in and out of 7-11 parking
lots.

Maintenance: The car has had few issues over the years. Oil changes
every 4-5k miles or 5-6 months. Exclusively worked on by
establishments that employ a spinning sign guy out front. The rattles
a bit and pulls hard to the left, just like a real NASCAR!

Other issues: Cup holders are small (Japanese engineers in 2203 had no
idea how far we would come). Water pump was purchased from an Indian
burial ground, so the car is slightly haunted.

See attached pictures. I've had some people email me and ask me for a
better picture of the full car. My response: No. But I will send you
more pictures of the dents.

If you want to come by and see the car, great. It has to be while my
wife is home so she can see that I actually put the car up. any
attempts to negotiate will result in price increases.

This owner’s 2003 WRX was only the second year it had been in the U.S. The big attraction was its turbocharged and intercooled 2.0-liter engine that developed 227-horsepower and 217 lb ft of torque. It came standard with a five-speed manual transmission. As this original owner knows, it was fast and fun to drive. When it was first introduced in 2002, performance enthusiasts couldn’t wait to get their hands on the race-inspired production WRX when it became available. It’s no wonder this WRX owner doesn’t want to let it go.

We have to feel sorry for this guy as he doesn’t want to sell his beloved 2003 Subaru WRX “bugeye” performance car and get a minivan. Will his wife find out he’s duped her and put up this bogus ad on Craigslist? If you see this WRX with a baby riding in a car seat, you’ll know exactly what happened.