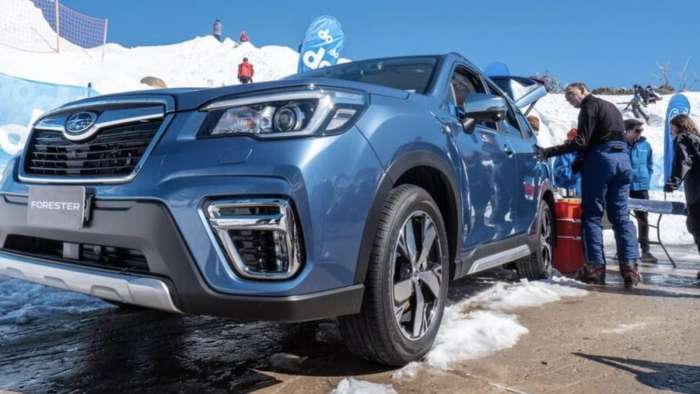 You may not think visibility, braking, and child seats are important until you need it. Those are three areas the newly-remodeled Subaru Forester scores highest in compared with all other compact SUVs in America. Why is it important for consumers?

Cars.com scored seven of the top compact SUVs to find out which are the best for consumers. They took the most popular 2019 SUVs, the Toyota RAV4, Honda CR-V, Hyundai Tucson, Jeep Cherokee, Nissan Rogue, Subaru Forester, and Volkswagen Tiguan to see which is the best. They only took SUVs updated or redesigned since their last compact SUV test in 2017 and invited back podium finishers Tiguan, and CR-V even though they haven’t undergone significant revisions.

The #1 compact SUV was the 2019 Volkswagen Tiguan SEL Premium R-Line. As-tested price: $40,485 (most expensive in the test). The verdict: The Tiguan repeated as champion on the strength of how it drives, roominess, media, safety tech, and cabin comfort according to the editors.

Forester is #1 in safety

Coming in at #2 was the 2019 Subaru Forester Touring. As-tested price: $35,270. The verdict: cars.com says, “The Forester does most things reasonably well and almost nothing poorly, resulting in a well-rounded, appealing compact SUV.”

The newly-redesigned 2019 Subaru Forester scored higher than all SUVs in braking and visibility. Those aren’t sexy attributes until you find yourself needing to stop for that idiot who cuts in front of you on the Interstate, or when you quickly need to see who’s coming up next to you in heavy traffic. Both could save you from getting in an accident.

They also found in their 16 test categories, the all-new Subaru Forester didn't score lowest in any test, which not even the VW Tiguan could claim. Another strong point was the Forester’s child safety seats matched the Tiguan for a top score. This is another area of safety consumers with young kids may not think about until you strap them in.

You May Also Like: Check New IIHS Safety Ratings Before You Buy; Subaru Leads All U.S. Brands

The new 2019 Subaru Forester also gets improved safety ratings over the outgoing model. The next-generation Forester gets Good marks in crashworthiness in the driver side, passenger side, moderate overlap front, side, roof strength, and head restraints and seats. Forester gets a Superior rating in front crash prevention. It gets an acceptable rating for headlights and a good plus rating in child seat anchors (latch) ease of use. The next-generation 2019 Forester improves in passenger side crashworthiness and child seat anchors over the 2018 model year. Forester earns a 2019 Top Safety Pick rating.

The 2019 Subaru Forester isn’t the sexiest pick for the best compact SUV, but excels in areas of safety consumers may miss but will appreciate after they live with the small SUV awhile. You can check out our review of the new 2019 Forester Sport here.