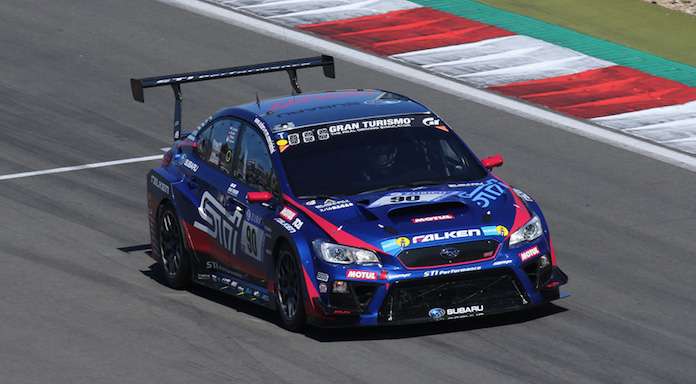 Subaru WRX STI Flames Out in Nurburgring 24-HR Race; No Three-Peat in 2017

The Subaru WRX STI NBR had a rough 21 hours at the Nurburgring 24-hour race. What happened with 3 hours remaining?
Advertisement

The 45th running of the Nurburgring 24-Hour race will be one to forget for Subaru. Subaru's race at the Nurburgring 24-hour ended with the WRX STI flaming out after 21 hours of racing. With only three hours to go, the 2017 Subaru WRX STI NBR suddenly caught on fire and was forced out of the race. Subaru had won the past two years in-a-row, but there would be no three-peat in 2017.

It was a weekend with problems and things didn’t go Subaru’s way in Germany. Subaru started in the second row after recording the second fastest qualifying time. They had been the fastest on the track in qualifying the day before in round one. After one hour after the race was underway, the WRX STI NBR slipped to third place in SP3T class behind the Audi TTRS and Lexus RC.

After stopping in the pits, the temperature in the engine bay rose and a radiator grille was installed to lower the high temps. It was hot enough that the fuel in the lines was boiling. After the repair and seven hours into the race, Carlos Vandal was able to pass the Lexus RC and moved into 2nd place and was gaining ground on Audi.

The night hours were uneventful

The Subaru WRX STI kept second place throughout the night and the Nurburgring race car was running strong. But as the sun rose, the temperature also went up and the team worried about the under-hood temps again. In preparation for the temperature rise, the pit crew removed part of the under panel to extract the air inside the engine.

Fifteen hours into the grueling race, with the pits becoming busy, the WRX STI was hit by another car and suffered damage to the body on the driver side. Fortunately there was no damage to the rim and the axle. The crew reinforced the body panel near the door, but the WRX STI lost valuable time and slipped into third place.

At 11:35 am Sunday morning, the WRX STI being driven by Marcel Lasee suffered more damage when he hit another car at the Grand Prix section on turn 11. The team decided to rest Lasee thinking of his physical condition and mental state after the crash. The STI NBR was able to continue racing, and was within 1 min 30 sec behind the leading Audi TTRS.

With 3 hours remaining, disaster struck when the engine bay suddenly caught fire. Driver Carlo Van Dam escaped without injury, but the damaged Subaru WRX STI NBR was forced out of the race. The chance to three-peat ended with a disappointed team ending their day with the car flaming out. The 45th running of the Nurburgring 24-Hour race will be one to forget for Subaru. Subaru says the cause of the fire will be investigated after the vehicle returns to Japan. More information on what caused the fire to follow. Stay tuned.

SubaStar wrote on May 30, 2017 - 5:15am Permalink
SubaStar wrote on May 28, 2017 - 2:50pm Permalink Sadly, STI didn't finish the race this year. A fire at the front right end started at about 1 hour before the end of the race, when the WRX was in third position. Do we know the cause of this fire? Denis Flierl wrote on May 29, 2017 - 7:10am Permalink Hey SubaStar. Subaru was having extremely high temperatures under the hood and the fuel was boiling. It could have been the cause of the fire. Thanks for reading! Thanks for that explanation Denis. Surprisingly, the car's front end was not a grille but a king of plexi-glass screen: why that ?