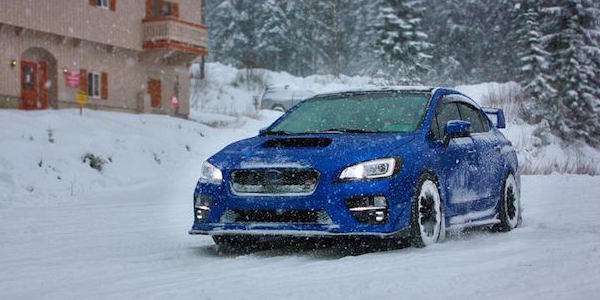 Subaru WRX AWD is good the STI is better

The 2016 Subaru WRX uses a different AWD system than the WRX STI. What makes the STI’s better?
Advertisement

When winter arrives, that’s when most performance cars sit in the garage, but not the Subaru WRX STI. STI fans get excited when they see the first snow flake of the season. It means it’s about to get a lot more fun when they head out on the snow covered roads. They will be the ones pulling others out of the snow bank who are stuck and can’t move. This is what Subaru’s Symmetrical all-wheel-drive system is designed for. It was developed by Subaru Tecnica International (STI) on the rally stages.

The AWD systems aren’t the same in the WRX and WRX STI. Both are good, but the WRX STI’s is the best. The WRX uses a similar system as the Forester, Outback, Crosstrek crossover, the Legacy sedan and Impreza compact. The AWD system in these vehicles is excellent and beats most other systems out there. The 2016 Subaru WRX STI uses a very different AWD setup designed just for the high-performance model. WRX STI will do things in the dirt, mud and snow others won’t because it’s a street-legal rally car. Here’s the differences in the Symmetrical AWD systems.

The 2016 WRX with 6-speed manual transmission uses a viscous-coupling locking bevel-gear center differential built into the transmission case distributes torque 50:50 front-to-rear. Slippage at the front or rear wheels causes torque to transfer (up to 100 percent) to the opposite set of wheels. WRX shares this system with the Impreza, Crosstrek and Forester with manual transmissions.

The 2016 WRX equipped with the Lineartronic continuously variable transmission (CVT) gets a different setup. It uses an electronically managed continuously variable transfer clutch actively manages torque distribution in response to driving conditions, acceleration, deceleration and cornering. Slippage at the front or rear wheels causes torque to transfer (up to 100 percent) to the opposite set of wheels. WRX shares this with all Subaru models equipped with the CVT automatic.

STI thrives in the mud and snow

When there are slippery surfaces, such as gravel or snow where extra traction is needed, the STI has the grip needed. Subaru designed the WRX STI with the Auto (+) setting to tighten the LSD. Manual mode offers six selectable settings, allowing the driver to vary the front-to-rear torque distribution to optimize all-wheel drive performance to suit specific driving conditions.

The WRX STI’s DCCD AWD System has three automatic modes: “Auto” provides optimal performance for all conditions. The “Auto” (-) Active Sport setting shifts the torque bias to the rear and also opens the center limited-slip differential (no locking factor), which improves steering feel for performance driving on the track.

Because Subaru developed the technology on the rally stages around the globe, both WRX and WRX STI performance enthusiasts benefit directly from the brand’s motorsports involvement. The STI benefits a little more. When the snow gets deep, you won’t find the 2016 Subaru WRX STI or the WRX sitting in the garage. They’ll be heading to the ski slope and probably helping a few stranded cars along the way.

Watch as a WRX Bugeye pulls out a Dodge Charger police car stuck in the snow.

LG's New EV Battery Plant Is a Welcome News for Tesla
Tesla Giga Berlin's New Hurdle: It's Not Only the Gov't, but Now Tesla Itself
END_OF_DOCUMENT_TOKEN_TO_BE_REPLACED