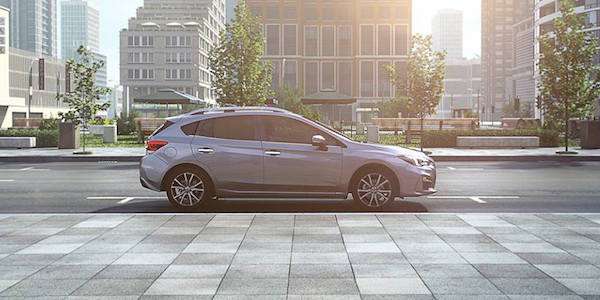 Subaru Wants Conquest Sales from Mazda3 and VW Golf, Here’s How New Impreza Will Challenge them

Subaru completely redesigned the 2017 Subaru Impreza. How will the new compact take away sales from Mazda3 and the VW Golf?
Advertisement

They’re called conquest sales and Subaru wants the newly-redesigned 2017 Impreza to get some from the Mazda3 and Volkswagen Golf. Those two models are sporty and attracting a younger buyer. It’s exactly the demographic Subaru wants with the all-new Impreza compact.

How will they do it?

The new 2017 Impreza is sportier and will have a fun-to-drive nature like the competition. That was Subaru’s goal when the spent $1 Billion on its redesign. It gets new underpinning which will change the driving dynamics. It’s Subaru’s new Global Platform that will underpin every new Subaru in the next 10 years.

Nick Senior told GoAuto, at the 2017 Impreza launch in Australia, they want to go after “heavy hitters” like the Mazda3 and VW Golf. Senior says, “That’s where the potential for us is. While the Mazda in particular has an entry level, there is a significant volume in their mid and upper-range models so that’s where we want to pitch ourselves and see if we can get a bit of that action.”

The Subaru Impreza was once a part of the WRX performance model lineup. When the WRX broke away to differentiate itself as Subaru’s performance model with the STI, the compact Impreza lost some of its appeal and sporty nature. It lost some of the reputation as a fun-to-drive model. Subaru wants Impreza to get that back.

Senior says the new 2017 model will restore that perception. Subaru’s lineup has overall been perceived as fun-to-drive and sportier that other small SUVs. The boxer engine sits low in the chassis and this improves driving dynamics even in the Outback, Forester and Crosstrek. He’s says until now, Impreza was the one left out of the mix when it came to Subaru designing a sporty nature into Impreza.

How did engineers do it?

The body and chassis will be 70-100 percent more rigid which will translate to improved steering response, and the increased rigidity of the suspension mounting will also reduce body roll by 50 percent compared to current models. The 2017 Impreza will have a lower center of gravity improving driving dynamics in the corners producing a more dynamic ride.

Senior goes on to say, “If we go back to the fun-to-drive element Impreza had when it was represented by Impreza WRX, we’ll see more of that fun-to-drive element come into the new 2017 Subaru Impreza.” It’s how Subaru will get conquest sales from the “heavy hitters” like Mazda3 and Volkswagen Golf.

Duke Woolworth wrote on October 1, 2016 - 4:28pm Permalink
The rising beltline, similar to the Mazda 3, results in diminished rear vision. My wife votes no on both.
Marty Marsola wrote on October 2, 2016 - 1:37pm Permalink
I own a 2016 Legacy, a wonderful car. Just about any car Subaru comes out with is a quality vehicle. Probably this one will be another.
Mike M wrote on October 2, 2016 - 11:20pm Permalink
So let's go after those “heavy hitters” and that fun-to-drive element with offering a CVT only....Good luck with that Subaru...
Fahr Sicher wrote on October 3, 2016 - 12:15pm Permalink
Selling driving dynamics is difficult in the States because most shoppers either 1) don't care 2) don't get it or 3) think a more rigid body = rougher ride. If buyers here did actually understand driving dynamics then Chevy and Chrysler would be out of business with their "wollering hog" suspension and torsional flacidity. The marketing team at Subaru has been excellent lately and the newly bent sheet metal certainly is helping attract new customers from the "I don't want a Toyota or Honda" crowd. Best that they not beat this new "fun to drive" drum too hard however as it does note really support their safety and durability positioning that has done so well for them of late. Rather, let the bloggers and buffs sell it for them.
red wrote on October 3, 2016 - 6:40pm Permalink
Any idea when this will be available in US.
Mike M wrote on October 5, 2016 - 4:57pm Permalink
Preordering "supposed" to start mid Oct and delivering starting in Dec
Dana wrote on October 5, 2016 - 1:49pm Permalink
hopefully there is a good increase in torque with that engine, because I'm hearing the car weighs a lot more than the 173hp impreza from 2006 that was peppy and fun to drive. It needs some power with those other upgrades to take from the zoom zoom crowd.