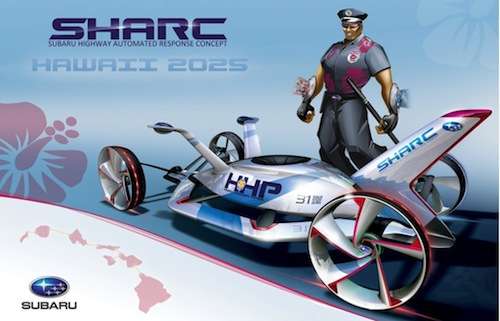 Subaru has captured the attention of the world by designing the SHARC emergency response vehicle and wins the 2012 Design Challenge.
Advertisement

If you are in Hawaii in the year 2025, it will be a very safe place because Subaru has built the ultimate law enforcement patrol vehicle. And they have won the 2012 Los Angeles Auto Show Design Challenge competition after the presentation of its SHARC (Subaru Highway Automated Response Concept) vehicle. This is the ninth year that the Design Challenge has taken place where a theme is chosen and the major automotive design studios showcase their talents. Subaru went up against some stiff competition from the GM Volt Squad, Honda Drone Squad and CHiPs 2025 Traffic Crawler, BMW E-Patrol Human-Drone Pursuit Vehicle and Mercedes-Benz Ener-G-Force.

The futuristic SHARC is on patrol

This year Subaru chose the SHARC vehicle to patrol a hypothetical inter-island "Paradise Highway" in Hawaii thirteen years in the future. It may seem like a far fetched idea, but Subaru is one of the most innovative automakers on the planet and it could become reality sooner than we think. In the future the SHARC will provide protection and rapid emergency response solutions for Hawaii's highway patrol. Hawaii will present unique challenges because of its strict environmental regulations.

Subaru developed the “cutting-edge” SHARC to be environmentally conscious and also affordable. Because of reduced highway patrol budgets worldwide, Subaru developed the SHARC to be green and carbon-neutral and is powered by renewable energy and operates autonomously. This will reduce the need for a large full-time highway patrol staff. While it sounds “far-out,” this is what caught the attention of the judges and won the design challenge for the Subaru design team.

The SHARC design won this highly anticipated competition for "capturing the vision of Design Challenge theme by combining functionality and problem-solving technology around a dynamic and plausible story" The future vehicles were judged on a number of factors including consideration of future needs for advanced technology; speed and agility on future freeway systems; creativity of the solution; meeting the specific region's mandated emission standards; and environmental sensitivity for maintenance and recyclability.

Subaru has a global team led by Fuji Heavy Industries Ltd. design department in Japan, their design studios in the U.S. and also in Europe. Subaru is advancing around the globe with new vehicles like the all-new 2014 Subaru Forester and the recently launched 2013 XV Crosstrek. Subaru is an automaker that we will be hearing a lot more from in the future.