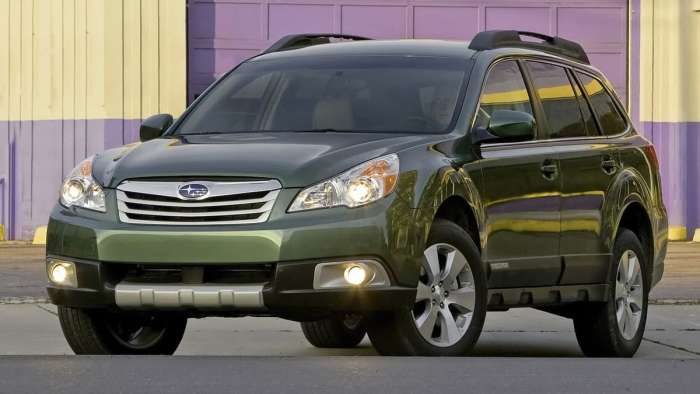 Subaru of America is recalling the above vehicles sold or ever registered, in the states of Alabama, California, Florida, Georgia, Hawaii, Louisiana, Mississippi, South Carolina, Texas, Puerto Rico, American Samoa, Guam, the Northern Mariana Islands (Saipan), and the U.S. Virgin Islands. 43,394 total vehicles are affected in these U.S. states.

These Forester, WRX/STI, Outback, Legacy, Tribeca, and Impreza vehicles are equipped with Takata airbag inflators assembled as part of the passenger frontal airbag modules used as original equipment or replacement equipment. In the event of a crash necessitating the deployment of the passenger frontal airbag, these inflators may explode due to propellant degradation occurring after long-term exposure to absolute humidity and temperature cycling.

An explosion of an inflator within the passenger frontal airbag module may result in sharp metal fragments striking the front seat passenger, driver or other occupants resulting in serious injury or death.

Subaru has notified owners, and dealers will replace the front passenger air bag inflator, free of charge. The recall began on January 25, 2019. Owners may contact Subaru customer service at 1-844-373-6614. Subaru's number for this recall is TKA-19. Owners can also use the Subaru VIN lookup tool to check all recalls.

Paul Trexel wrote on February 8, 2019 - 3:14pm Permalink
Is Subaru actually recalling 500,000 vehicles or is your title incredibly misleading? NHTSA says 452,630 vehicles are being recalled for their Takada airbags. It goes on to say Subaru is recalling just 43,394 vehicles. Why does the title quote 500,000? I'm very confused.
Marcus wrote on February 8, 2019 - 10:25pm Permalink
Received my safety recall letter on Tuesday. I dropped my 2014 WRX off Wednesday after work, picked it up Thursday after work. Very quick turnaround!
William Rueth wrote on February 17, 2019 - 9:40am Permalink
Nice report, looking forward to future reports!
Brian Hill wrote on July 19, 2019 - 4:46pm Permalink
I had my airbags replaced and within in 3 weeks after replacement I had the Airbag light start going on and off with nobody sitting in the passenger side. The dealership said it was not a problem with the airbag replacement and they would be happy to take a look at the problem with a full service charge. I told the Service Manager that I had never had any problem with the light for Six years before the replacement. He told me that it could be a cell phone to close to the sensor. The airbag light in on all the time now. I do not want to pay 300 or 400 for them to reset the sensor. But they will not check the car without a paid service call.
Stephanie Doser wrote on December 19, 2019 - 8:36am Permalink
That is crappy. Seems like no problem until they worked on it, somehow affecting sensor. I hope you have since had the problem resolved with no expense, and if not, at least let folks what dealership NOT to trust.