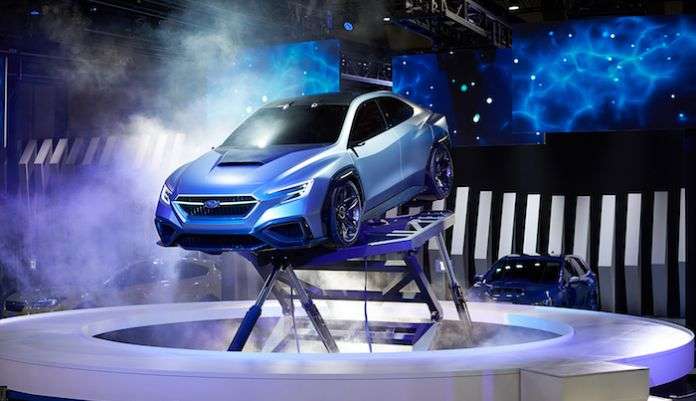 Subaru conducts improper vehicle inspection procedures on its JDM vehicles. How does this impact consumers?
Advertisement

A wet blanket has been thrown on the Tokyo Motor Show where Japanese automaker Subaru just unveiled the next-generation WRX/STI performance concept. What should be a festive mood has turned to a frown. According to a report by the Nikkei Asian Review, Nissan Motor was first reported to let uncertified workers in Japan inspect vehicles prior to shipment. Now, after internal investigations, Subaru Corporation has also been found to be lax on the final inspection rules.

According to the report, Japanese automakers are required by the government to conduct a complete vehicle safety inspection before shipment from the factory. The vehicle inspections are to be conducted by certified inspectors who check vehicle functions like brakes, steering and other vital areas to ensure safety before they are released for shipping.

The investigation found auto workers still training to be certified were involved in inspections at Subaru's main automobile factory in Gunma, Japan where they make the popular Forester SUV, Crosstrek crossover, WRX, WRX STI performance sedans and BRZ sports coupe. The Outback, Impreza, and Legacy are made in their Subaru of Indiana Automotive (SIA) plant in Lafayette, Indiana and are not affected.

Subaru has about 250 certified inspectors at their Gunma factory who normally undergo two to six months of training to obtain their certification. But the Japanese automaker apparently decided their workers involved had the proper knowledge and skills to carry out the inspections because “they had passed an internal exam before enrolling in the training” according to the Nikkei report.

According to another report by The Seattle Times, Yasuyuki Yoshinaga, Subaru CEO says, the faulty inspections for the Japanese automaker’s finished products had been going on for 30 years. He said the workers involved “did not fully realize their method was wrong, and a thorough review of the entire inspection system is needed.” It has not been determined if there will be a recall, but it could involve up to 255,000 domestically-produced Subaru vehicles and cost $44 million if a recall is issued in Japan.

If this “certification” inspection process has been going on for 30 years at Subaru, we wonder why it’s now a big problem. If Subaru had an inspection issue, releasing vehicles with systems that were not safe, it would have manifested itself during the past 30 years. Subaru has a reputation for building reliable vehicles that their customers hold on to for decades.

A certification is just a piece of paper and doesn’t necessarily indicate competence. It seems to us, Subaru trusted their internal exams to produce workers with the proper knowledge and skills to carry out the inspections accurately. Maybe the Japanese government needs to rethink how this certification process should be conducted.

We don’t think Subaru was trying to “cut corners” by using unskilled workers for the inspections of the hundreds of thousands of the JDM vehicles the past 30 years. Consumers shouldn't be concerned about the reliability of the Forester, Crosstrek, WRX, WRX STI and BRZ vehicles shipped from Japan. Subaru Chief Yasuyuki Yoshinaga apologized for the mistake saying, “We are truly sorry, and we apologize,” after bowing deeply. “We all wanted to do the tests properly.”