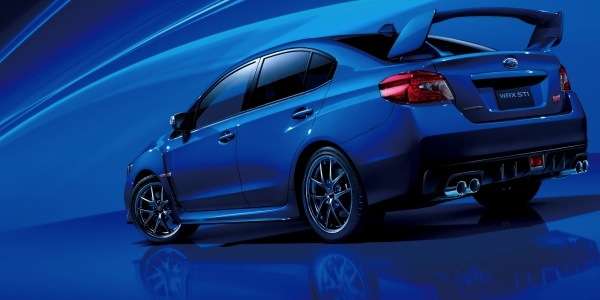 Subaru Japan announces the new 2015 WRX STI Type S, but it won’t be making it to other global markets.
Advertisement

Subaru launches the 2015 WRX STI Type S for the Japan market, and will come with a new 2.0-liter high-performance direct injection turbocharged engine. This new 2.0-liter engine in the STI Type S has been motorsport tested at the Nurbugring 24-hour race in the 2015 Subaru WRX STI NBR race car. The WRX STI Nurburgring 2.0-liter engine produces 335 horsepower and develops 340 ft lbs of torque. The 2.0-liter in the Japan only model produces 227 kW (304 hp) and 422 Nm (311 lb ft of torque). The new 2.0-liter has close to same hp (305 hp) and more torque (290 lb ft) compared to the other global 2.5-liter boxer STI models.

Will we see the new 2.0-liter STI in other global markets?

For now, Subaru will only use the 2.0-liter high-performance direct injection turbocharged engine in the Japan market. They’ve done this before with other cars and we don’t always see the advancements in world markets until later. Just like many automakers, Subaru is downsizing their engines in favor of smaller more efficient powerplants. But the good news is, these smaller engines can produce more horsepower than the larger outgoing mills.

We’ll see smaller more efficient engines in the near future

Auto manufactures are doing this to keep up with the new global emission standards. Moving forward, we will see Subaru use smaller displacement powerplants and they will all feature direct injection, they will be turbocharged, and will have higher compression and will also be lighter. We see the new 2015 WRX S4 2.0-liter pumping out 221 kW (296 hp) and 400 Nm (295 lb ft of torque). That’s a significant jump from the other global models.

Subaru is moving towards a new global platform to standardize all their vehicles. This will be put in place in the compact Impreza to an all-new, full-size seven-seat crossover that could be based on the Japan market 2015 Exiga. This will help cut production costs and development time. Subaru has learned this from parent company Fuji Heavy Industries Ltd. who manufactures everthing from Trash trucks to airplanes.

According to Automotive News, we’ll also see Subaru’s redesigned vehicles all get a new generation of engine technology in 2016. The new more efficient smaller engines will get direct injection, lean-burn technology and cylinder deactivation. The new 2015 2.0-liter STI engine is a move in that direction and will also get this new technology.

Subaru is changing the driving dynamics of the WRX STI in direct relation to the engine upgrades. This will be similar to what we see them doing with the new LEVORG sports tourer. Subaru put its first downsized turbo on sale last spring. LEVORG features a new 1.6-liter direct-injection turbo engine that also went on sale in Japan.

That new powerplant subs for a naturally aspirated 2.0-liter engine and the 1.6-liter turbo delivers better fuel economy than the 2.0-liter, and pumps out power equal to that of a 2.5-liter engine. Subaru may be doing this in their other vehicles in the future. Naoto Muto, executive vice president for global engineering told Automotive News, Subaru is studying a possible use in the United States of expanding turbos to sub for bigger engines in the lineup.

Will we see the new 2.0-liter high-performance direct injection turbocharged engine here in the U.S. in the 2016 WRX STI? If you think so, you might want to wait on getting that 2015 Subaru WRX STI.