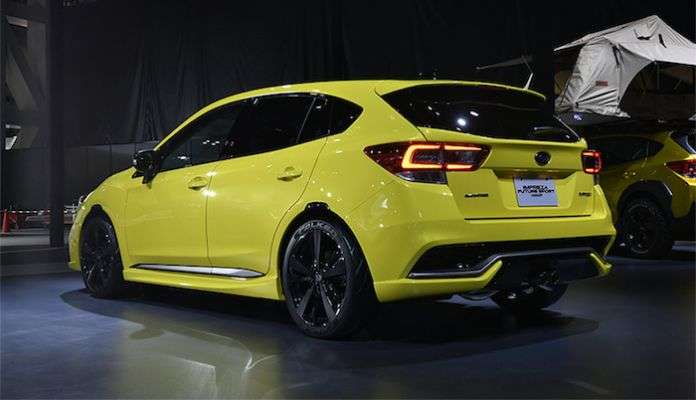 The 2018 Subaru Impreza Sport Concept is the STI-enhanced model fans want in the US.
Advertisement

If Subaru wants to sell more Impreza compacts, they need to build this Impreza Sport STI concept they unveiled at the Tokyo Motor Show. Subaru said they will be bringing more STI-enhanced vehicles to production, and here’s one they need to bring to production sooner than later.

Subaru announced at the New York International Auto Show 2015 that more models tuned by STI will be available in the U.S. in the future. These STI-enhanced Subaru’s will feature more extensive modifications from the factory than previously offered, such as suspension, performance, braking, chassis and aerodynamic upgrades. Subaru also said STI-engineered parts will replace Subaru Performance Tuning (SPT) aftermarket parts in the U.S. market.

The Impreza 5-Door is the perfect vehicle for Subaru to let their performance partner, Subaru Tecnica International (STI), get their hands on. Subaru needs a hot hatch model since they dropped the WRX/STI hatch in 2015. Now that they build the Impreza at their US plant in Indiana, it would fit perfectly in their portfolio of U.S. performance cars.

Japan and Europe get the Levorg STI Sport hot hatch, so why not let U.S. performance fans get a hot Impreza STI hatchback model? It would be easy for Subaru to drop in the WRX-sourced 2.0-liter direct-injection turbo (DIT) boxer with 268hp with a 6-speed manual gearbox. 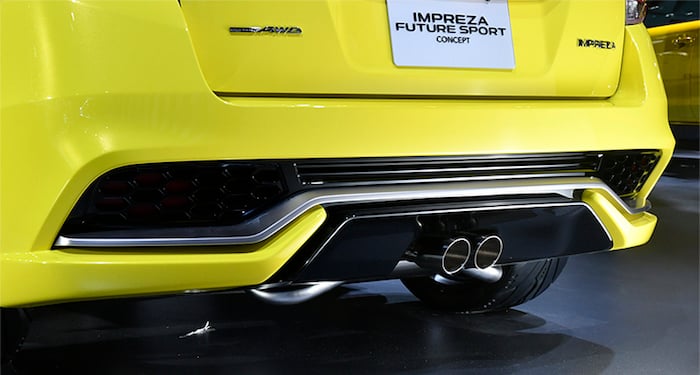 The show model, Subaru Impreza Future Sport Concept, looks pretty cool with the body kit, larger wheels and performance tires, and high-performance custom exhaust with two STI tips sticking out the back. The show model comes in a Sunshine Yellow livery and also gets sporty front and rear bumpers, with a lower center of gravity and more dynamic shape than the current model.

It’s all speculation, but an Impreza STI hatchback would likely be a big hit with performance fans around the globe and especially in the US since Subaru doesn’t offer a hot hatch WRX/STI. So far, Subaru is waiting on a WRX/STI hatchback variant. Fans would certainly buy a compact sports tourer like the new 2018 Subaru Impreza hatch STI unveiled at the Tokyo Motor Show. It would be sporty, fast, agile and offers greater utility.

Jake wrote on November 8, 2017 - 11:54am Permalink
Denis, in the last paragraph you write "so far, Subaru is waiting on a WRX/STI hatchback variant." What do you mean by "variant?" Thank you.
Denis Flierl wrote on November 14, 2017 - 9:32am Permalink
Hey Jake, a "variant" is a model that differs in some respect (sedan vs hatch) from the current WRX/STI. Thanks for reading!
Dave wrote on November 8, 2017 - 12:08pm Permalink
Yes please. I'm arriving 110,000 miles on my '14 WRX hatch...the age at which I normally trade my vehicles in. I'm putting it off for now simply because Subaru offers nothing comparable and I don't do sedans. If they're still not offering an AWD performance hatch in another year or two, I'll have to switch to a manufacturer that does (not my preference, but better than a sedan or a slug).
Carlo wrote on November 8, 2017 - 7:05pm Permalink
110,000 miles in 3 years??
Dave wrote on November 9, 2017 - 12:15am Permalink
Well, 108,000, in 4 years. They stopped building the '14 model years (both hatches and sedans) on Sept. 30, 2013, to retool their assembly lines for the model year '15 sedans. I bought mine a week or two later, as all hatches were selling out within a few hundred miles of me. The dealership actually still had it in their back lot with plastic still on it, and it was the only hatch they had. The other 5 dealerships I planned to visit all called me that day to tell me their hatches had already sold, and there was a couple waiting to buy my car if I didn't buy it first.
Denis Flierl wrote on November 14, 2017 - 9:35am Permalink
We are still surprised Subaru axed the WRX/STI hatch. Send in your requests to Subaru of America. Maybe they will bring it back when the new-gen models launch. Thanks for reading Dave!
Ryan wrote on November 26, 2017 - 9:22pm Permalink
I am looking into getting an Impreza for the MPG and AWD but I am turned off by the uninspiring engine and performance. This needs to happen asap!!
Ed B wrote on December 12, 2017 - 9:27am Permalink
Don't hold your breath folks. This should happen but with the current success of the base Impreza I doubt Subaru corporate has a sense of urgency about a performance version - no matter how logical it seems to us. I fear they may go away from their roots on the 2019 Forester XT (if they even keep that moniker). The Ascent is proof positive that they're playing it safe as long as the sales grow. It's hard to argue that line of thinking considering their ascension in the market place (pardon the pun).