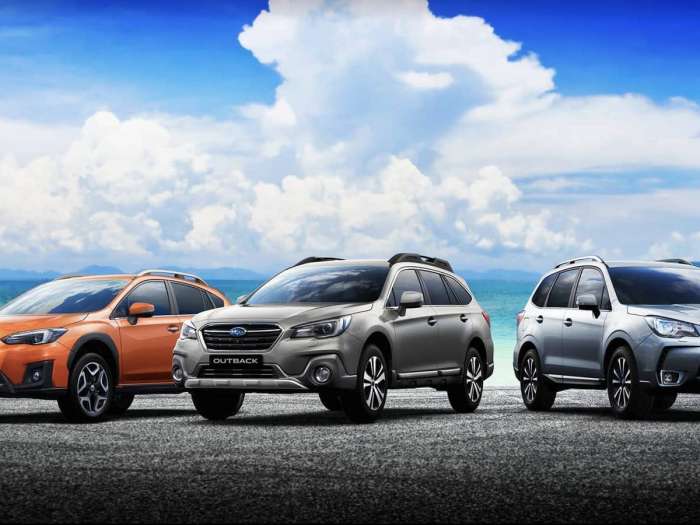 Of all the automakers, Subaru has the biggest shift from sedan to SUV/Crossovers. See what is next for Subaru.
Advertisement

Subaru of America (SOA) is on track to hit its 10th consecutive year of record U.S. sales in 2018 and it’s because of three models; the Outback wagon, and Crosstrek crossover. It will also get there with the launch of its all-new 2019 Ascent 3-Row family hauler. In the first 6 months of 2018, sales of its sedans are down. Impreza is down -12.1 percent, WRX/STI (-7.1), Legacy (-16.2), and the fourth-generation Forester is also down -9.9 percent before the launch of the all-new 2019 model.

Most automakers are struggling as sedan sales drop, but Subaru bucks the trend with its popular Outback wagon and the new second generation Crosstrek that is the hot model in the Japanese automaker’s stable. SOA also just launched the 2019 Ascent 3-Row and sold 1,897 units as it made its dealer launch in June.

According to a report by Autoweek, Subaru is among the automakers with the biggest shift to light trucks (crossovers and SUVs). Subaru's total sales grew 53 percent from 2013 to 2017, even though its sedan volume has declined by 34 percent, the biggest shift of any automaker.

Subaru has sold more Outback wagons, Forester SUVs, and Crosstrek crossovers in January through May of this year than it did in all of 2013. And Subaru should see even more growth with the launch of the all-new 2019 Ascent 3-Row family hauler and the all-new fifth-generation Forester when it arrives later this fall.

In spite of the drop in sedan sales, Subaru isn’t giving up on the Legacy sedan, Impreza compact, and WRX/STI performance line. Dominick Infante, Subaru’s national manager of product communications, told Motor Trend this month, they will still offer sedans like the Impreza and WRX/STI because they are a good hedge as gas prices go up. “Gas prices are starting to come up now. So a good hedge for better economy is having a sedan” says Infante.